Law enforcement and public safety have become major application areas of drone technology. This is no longer new development, and the use of drones for police operations or search and rescue has become widely accepted.

One frontier in which drones have yet to break through is traffic enforcement. There have already been several efforts to use drones to more effectively implement traffic rules and these have resulted in varying degrees of success. What are the merits of using drones for traffic enforcement? Is it really a good idea? Has there been public opposition to this particular use case?

The Benefits of Drone-Based Traffic Enforcement

Advocates of using drones for traffic enforcement have described them as a cross between helicopters and high-speed cameras. Drones can be readily outfitted with equipment that will allow them to measure the speed of moving vehicles, as well as identify them via photos and license plates. More importantly, drones are not bound by roads and are even more mobile than helicopters.

A huge benefit of drones is that they provide aerial coverage at a very small fraction of the cost of flying a helicopter. Drones are also easier to operate, although FAA certifications may still apply for drone pilots. With the low cost and relative ease of deployment, local traffic enforcement agencies can more efficiently cover the roads in their areas.

Some agencies have also proposed the use of drones to signal or warn drivers who are exhibiting high-risk behavior. While this can be easily done with current drone technology, there is still a question on whether drivers will cooperate with warnings given by a drone.

How Effective are Drones as Deterrents?

The potential coverage of a drone fleet should allow them to be more visible than police cruisers or bikes. Ideally, the mere presence of drones should help in traffic enforcement, as this should encourage drivers to avoid high-risk behavior.

However, the subject of cooperation of drivers to drone-based traffic enforcement is still questionable. In a survey done in the US, respondents stated that they believed that drones will be less effective than police cruisers or even speed cameras. Interestingly, respondents also ranked police helicopters as the least effective in mitigating vehicular crashes.

These results were even supported by a driving experiment that showed how drivers slowed down more frequently when confronted by a police car rather than a drone.

The results point to two conclusions. The first is that people are naturally more easily deterred by being confronted by an actual traffic enforcer. For this reason, police cruisers or bikes rank high in most people’s list of most effective traffic enforcement measures.

Speed cameras and traffic light cameras have become a deterrent by way of historical effectiveness. Although these do not result in a direct confrontation, these have been proven time and again to effectively identify erring drivers.

However, the results of the survey also showed that the use of drone technology can significantly boost the image of a traffic enforcement agency. This is a phenomenon that has been previously observed when the United States Postal Service adopted the use of drones.

The effectiveness of drones as a deterrent will likely follow the trajectory of speed cameras. Drone technology is still unfamiliar to many, after all. Once people are convinced that drones can effectively identify violating behaviors, compliant behavior is expected to follow suit. However, drones are not likely to be as effective as police cruisers – there is still nothing like having an officer on the ground.

The Challenges of Using Drones for Traffic Enforcement

The field of traffic enforcement is not unique in the challenges it poses for drone use. The concerns that apply to other fields also apply here, although the involvement of moving motor vehicles provides a unique context to the situation.

Drones have always struggled with public acceptance. Privacy remains the biggest concern of the respondents when asked about the concept of traffic enforcement drones. This is a concern that has been echoed in just about every single survey discussing drone use in public. It is worth noting that respondents from interurban areas are less worried about privacy, likely because these are areas where the expectation of privacy is lower.

Drones can be distracting

A common argument against the regular use of drones on major roads and highways is the fact that they can be distracting. Unlike helicopters, many people still consider drones as a novel technology.

This means that a drone flying above a group of moving vehicles will likely catch their attention. The worst-case scenario is that the use of drones causes more traffic-related accidents rather than helps avoid them. So far, there seems to be no detailed studies or trials exploring this traffic. This would have to be tested in real-world conditions to determine if it is an issue worth considering.

Potential for a drone crash

Safety is among one of the public concerns whenever the public sees drones flying overhead. Interestingly, people are more concerned about drones being used by the police, likely because these are associated with drone use by the military. It is worth mentioning that traffic enforcement uses a vastly different form of the technology.

One very real concern is the possibility of a drone crash. Regardless of the level of sophistication of the technology, a drone crash is still very much possible. If it happens in the middle of a busy highway, this momentary distraction can very easily cause a vehicular accident.

Addressing this problem will likely require a multi-pronged approach. Driver education will have to be updated so that drivers know about the presence of drones and the fact that drone crashes are possible. It would also be worthwhile to outfit traffic enforcement drones with parachutes to mitigate the effects of a drone crash. Unfortunately, this is an inevitability that the drivers and traffic enforcers simply have to be ready for.

Preliminary testing of traffic enforcement drones has been done in the US, Canada, China, Russia, India, and likely in a few other countries. This movement has been going on since 2016 but has never really been adopted as a formal policy. There are still several hurdles before this happens, both in terms of technology and regulation.

A research paper on the topic has proposed possible strategies that can facilitate the adoption of drone-based traffic enforcement:

As mentioned, people in interurban spaces tend to have lower expectations of privacy. This could prove to be a good starting ground for using drones for traffic enforcement. Hopefully, success in such an arena will help improve public acceptance for areas that are less urban and more rural.

An official policy on privacy should help allay the fears of the public when it comes to widespread drone use. Possible measures can include blurring the faces of pedestrians in the videos or limiting access to the videos only to selected officers in traffic enforcement.

The best way to show the public that the technology is safe is to demonstrate it in real-world scenarios. The assumption here is that the drones will likely operate with some degree of automation. A good demonstration should show how the drones can intelligently avoid obstacles and how they are equipped to mitigate the potential damage of a drone crash.

Finally, a drone-based traffic enforcement system will only gain legitimacy if it starts being used to hand out offenses. A few cases of speeding, improper lane switching, or failure to wear a seatbelt should be enough to show off the capabilities of the technology. As mentioned, drones will have to prove to be just as effective as speed cameras and traffic light cameras before they can be more acknowledged as deterrents to bad driving behavior.

Of course, all these strategies will be for naught if the technology and regulations are not there yet. Thankfully, automated BVLOS drone flight already seems to be on the horizon with the recent developments on Remote ID, 5G connectivity, and TBVLOS waivers for Public Safety Agencies.

The merits of using drones for traffic enforcement are undeniable. On the flip side, concerns over privacy and safety are also equally valid. After all, this involves adding more flying machines to a traffic system that is already prone to accidents because of drivers getting distracted or just behaving badly.

The maturity of drone technology plays a big role in determining whether it will be viable to fully integrate drones into a traffic enforcement system. Drones used in this application have to be extremely reliable. Otherwise, they may be the cause of more traffic accidents. If this happens, it will set back the drone movement by several years’ worth of progress. 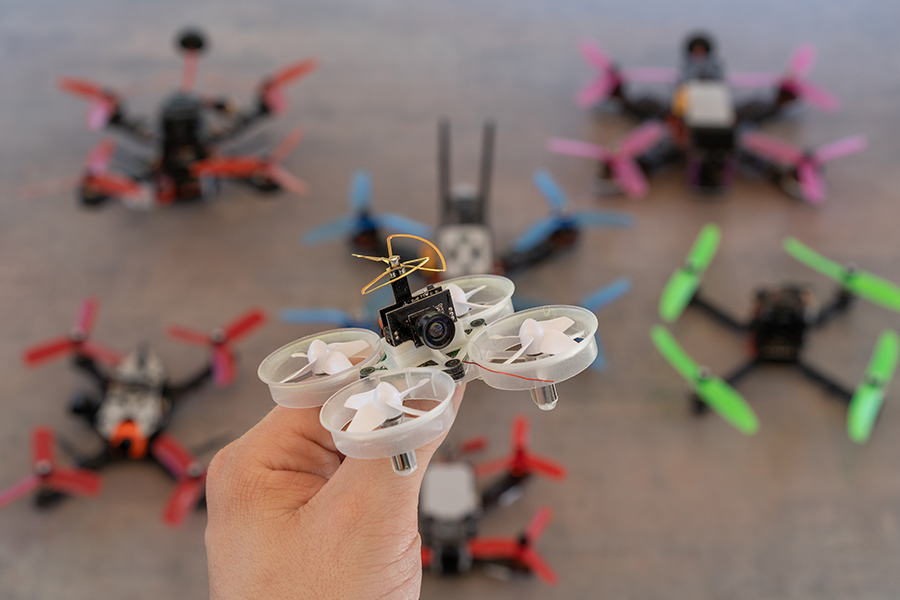 What Are CineWhoop Drones?