France-based Parrot was one of the first brands to make a name in the consumer drone market. The original Parrot Anafi was one of the top contenders in the initial wave of ultra-portable drones and held its own against the Mavic Air and Mavic Mini. However, Parrot has placed more focus on their commercial lineup of drones in recent years.

From what little we know, it seems that Parrot is going to launch a consumer drone unlike any other with the Anafi Ai. The Anafi Ai is set to launch in the second half of 2021.

The most unique benefit that the Anafi Ai brings to the table is its 4G connectivity. With a 4G data link, the connection between the drone and the base station can remain stable even across huge distances and despite the presence of obstacles.

According to Parrot, the Anafi Ai does not need a special subscription and will work with any SIM card. It remains to be seen how much data will be needed to fly a drone given that it will be continuously transmitting real-time video.

Essential to 4G flight is the “congestion control” algorithm. This was created to optimize connectivity by adjusting throughput using two parameters – the packet loss over the network and the latency of the connection. It also has a smart interference avoidance system that activates a channel avoidance algorithm in case signal interference is detected.

This also means that the photos and videos taken by the drone can be either stored locally in an SD card or uploaded wirelessly through the 4G network. This consumes data as well and potentially introduces the risk of interception. However, Parrot ensures that the connection link between the drone and the base station is fully encrypted and uses wireless security that conforms to European GDPR standards.

The technology to fly drones through 4G comes at a perfect time as the FAA continues to develop programs that might allow for flight beyond visual line of sight. This also opens the doors to more applications of fully automated drone flight – something that the FAA has recently been more receptive to.

There is undoubtedly a lot of potential in a 4G-enabled drone. Being able to maintain a stable connection when flying more than ten miles from the base station could come in handy in doing mapping or inspection surveys. We imagine this capability going hand-in-hand with Remote ID to maintain accountability.

As expected, the Anafi Ai comes with a 48 MP camera that can shoot 4K videos at 60 fps. It is stabilized by a three-axis motorized gimbal. As with the original Parrot Anafi, the camera sits flush at the front of the drone and is mounted at the sides. This gives it a much wider range of pitch motion and ensures that the propellers do not show up within the camera’s field of view.

The camera specs and sensor may seem underwhelming when we consider that the Autel Evo 2 drones can record at 8K resolution, as does the rumored Mavic 3 Pro. However, the Anafi Ai makes up for this with a 14 EV Dynamic Range that can capture colors in a billion-color palette. It also has an HDR10 feature that can strike an excellent balance even for over-exposed shots. The camera also supports up to 6x digital zoom.

While other drones may seem to have powerful cameras, we won’t prematurely say that the Anafi Ai cannot keep up with them. 4K resolution, after all, is still considered the industry standard. 8K videos sound great in theory but lack the support of 8K-capable displays.

One unique aspect of the Anafi Ai is subtle – its propeller design. Using the concept of biomimicry, the propeller blades of the Anafi Ai were patterned after the shape of the fins of humpback whales. This improves propeller efficiency, enhancing battery life and reducing noise. The Anafi Ai is rated for a maximum of 32 minutes of flight time in a single battery cycle.

The Anafi Ai comes with a full suite of flight sensors that include an IMU, barometer, magnetometer, 3-axis gyroscope, and time-of-flight sensors. Its optical sensors play a huge role in making the Anafi Ai appropriate for indoor flight. In case no GPS signal is detected, optical flow sensors aided by LED lights take over to help keep the drone stable.

The Anafi Ai uses 3D environment perception for obstacle detection and avoidance. This is possible through a pair of cameras located in the front of the drone. These cameras share a common pitch axis with the main camera but can move independently.

The pair of 1280 x 800 stereo cameras extract information from the drone’s surroundings to create a 3D depth map. This technique uses the basic principle of stereo vision. Along with information on the location and attitude of the drone, this allows the drone to create an occupancy grid sub-divided into 3D cubes or voxels. This occupancy grid is then used as a basis for the drone to come up with automated flight paths.

A potential flaw of this obstacle avoidance system is that it relies solely on the drone’s front-facing cameras. Its performance can also be compromised by poor visibility conditions such as low light, hazy environments, or dirty camera lenses.

Commercial drone pilots can benefit greatly from Parrot’s software development kits. There are several ways to run customized code on the Anafi Ai. You can either use the Air SDK to embed code onto the drone or create mobile apps using the Ground SDK. This gives you access to all the sensors of the drone, its cameras, and its connectivity algorithms. You can even create your own ground control software using the OpenFlight platform.

The Anafi Ai is a drone that was designed to work seamlessly with photogrammetry applications. Aside from automated flight features, the drone is fully compatible with the Pix4D software suite. The Anafi Ai flight app even has an embedded version of the Pxi4D flight planning app. Coupled with automatic obstacle avoidance and the robustness of a 4G connection, the Anafi Ai may just prove to be one of the best drones for mapping.

Is it worth getting?

The Parrot Anafi Ai is a strange drone, both in terms of its appearance and its set of features. Its design can be explained by the fact that it was inspired by animals, notably insects and birds. This is the reason for the peculiar position of the drone’s camera and stereo imaging unit.

Having the camera all way at the front extends its range of motion and field of vision. This is not a huge departure from the design of the previous generations of the Parrot Anafi. However, the drone would have looked a lot sleeker if the camera unit did not have colors that clashed so much with the rest of the drone’s body. The gray, white, and gold color combination just does not work.

The specs of the drone make it difficult to comprehend its purpose. It comes with 4G connectivity – a feature that not many consumer drones have frankly because it is impractical given BVLOS requirements. In this aspect, we can say that the Anafi Ai is ahead of its time and might just be setting the standards when BVLOS flight becomes more common.

However, the camera sensor of the Anafi Ai is already outdated. This places the Anafi Ai in a strange position of simultaneously being outdated in some aspects while pushing the envelope in others.

We’re yet to see how well the camera and obstacle avoidance system of the Anafi Ai performs. The drone still provides features that could be compelling for professional aerial mapping. It’s one of the few drones that were designed specifically for a photogrammetry workflow. If BVLOS flight for drone mapping becomes a standard, then the Anafi Ai has the huge advantage of being the very first drone right out of the gate. 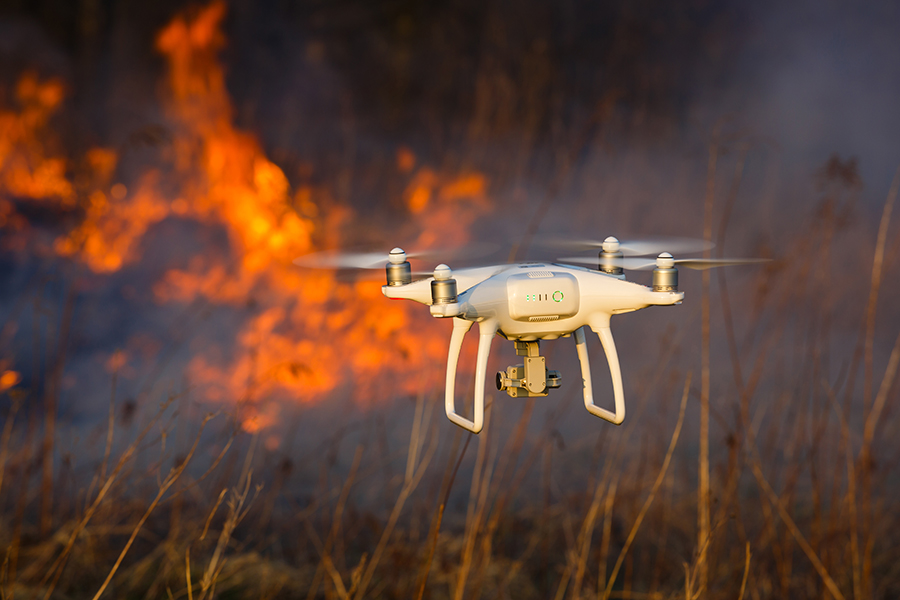 How Drones Are Used in Wildfire Response

Can I Use My Drone for Real Estate?