For drone pilots and enthusiasts, the term ‘No Drone Zone’ being part of the industry’s lexicon has proven to be quite problematic. However, it has become a natural consequence of an increasing number of drone sales, driven in huge part by user-friendly features and accessible prices.

Whether you’re a first-time drone pilot or someone with more experience, knowledge of these No Drone Zones is essential in making sure that you don’t run into legal problems. Aside from FAA regulations, you’ll also need to consider the limits enforced by other federal authorities and local law enforcement.

As a drone pilot, the number one thing you need to watch out for are airports. The airspace immediately above and around airports is called restricted airspace. Drone flight within restricted airspace is prohibited by default unless you have secured the proper authorization.

The reason for the tight restrictions on drone flight near airports is to avoid any close encounters between drones and manned aircraft. As small as drones are, they could still cause significant damage to manned aircraft should they crash into each other.

Underscoring the importance of complying with this rule is the fact that close encounters between drones and manned aircraft appear to be reported every single day. One of the more high-profile incidents was a spate drone encounters in the Gatwick Airport in London back in 2017, which resulted in the disruption of normal airport operations and impacted the flights of more than 100,000 passengers.

Airport-based restrictions on drone flight actually aren’t all that bad because the FAA has made it much very easy to request for the appropriate authorization. This is done through the Low Altitude Authorization and Notification Capability (LAANC), a centralized airspace authorization system that is accessible via several drone flight apps. This service is available to both Part 107-licensed and recreational drone pilots.

The process of requesting through LAANC is very quick, as we have demonstrated in this step-by-step tutorial for KittyHawk. The best part about it is that you can receive a response to your request in just a few seconds. This provides a lot of flexibility for drone pilots without compromising airspace safety.

Flying drones over any non-participants is prohibited by the FAA (even those who consent to it), so you can imagine just imagine how illegal it is to fly your drone over massive crowd-drawing events. Special emphasis is placed on sports arenas. According to FAA rules, flying drones in sports arenas is prohibited one hour before the start and one hour after the ending of any major sporting event. These include, but are not limited to, events by the NFL, MLB, NASCAR, or NCAA.

Since sports events are temporary by nature, you can expect a Temporary Flight Restriction (TFR) to be active at an arena at the time of an event. A TFR is another thing that a drone pilot needs to watch out for – more details on that later.

Reports of drones being used to smuggle illegal goods inside prisons and correctional facilities provide enough justification for imposing drone flight restrictions on such areas. These incidents have prompted the FAA to work with the Department of Justice (DOJ) and the Department of Homeland Security (DMHS) to come up with a list of facilities where drone flight is prohibited. According to the NOTAM notifying the list, drone flight is prohibited within 400 feet within the lateral boundaries of these facilities.

Because of drone-related problems, some prisons have become prime testing grounds for anti-drone technology. The Les Nicolles prison on the British island of Guernsey received a lot of media back when they started using an anti-drone fence that effectively jammed any communication signals to drones.

The White House would have been a great subject for drone photography if it weren’t for the fact that Washington, DC has some of the strictest restrictions on drone flight. There are two zones you’ll need to know about – an outer 30-mile radius ring centered around the Ronald Reagan Washington National Airport, and an inner 15-mile radius ring. There are different flight restrictions between these two zones. Collectively, this zone in Washington, DC is known as a Special Flight Rules Area (SFRA).

The rules within the smaller 15-mile area are actually easier to define – all drone flight in this area is prohibited unless authorization has been granted by the FAA and the proper agencies. You basically won’t get one unless you’re directly involved in a matter of national security or if you’re doing a job for a government firm.

Outside the 15-mile area but within the 30-mile area, you can still fly your drone subject to a few of the usual restrictions: all drones must be registered with the FAA and must weight less than 55 lbs. The drone pilots must ensure that the drone flies only below 400 feet AGL, steer clear of other aircraft, and will fly only in clear weather.

In areas where there’s a natural disaster, search and rescue operations, or any situation that calls for emergency response, air support will probably be needed either to provide reconnaissance, help with identifying people on the ground, or deliver essential supplies. This means that the airspace around these emergency response areas needs to be clear of any other aircraft that are not directly involved in these operations. Thus, any unauthorized drone flight is strictly prohibited in an emergency response area.

Under normal circumstances, the FAA will put up a TFR in an area that requires an emergency response. However, it does not necessarily require a TFR for you to be cited as violating drone flight restrictions when you choose to fly unauthorized in an area with ongoing emergency response operations. There have been reports of airborne firefighting personnel having to be grounded just because of unidentified drones flying in the area, thus slowing down the speed of their response. For the sake of people whose lives could be in danger, just don’t do it.

We’ve mentioned TFRs a couple of times now in the context of major sporting events and emergency response. By its very nature, a TFR describes a flight restriction because of conditions that are temporary in nature. Aside from the two reasons we have already mentioned so far, a TFR can also be declared for aerial demonstrations, movement by the President, Vice President, or special foreign dignitaries, or even just because of an abnormally high barometric pressure which can mess up with a drone’s sensors.

TFR’s are only valuable if they reflect real-time information. With this in mind, it’s important to check for active TFRs at least 24 hours before any planned drone operations. The best way to check for TFR’s would be to go straight to the source – the FAA maintains a list of active TFRs arranged chronologically which can be filtered by state, type, and issuing facility.

According to a joint announcement may by the FAA and the Department of Energy (DOE) in December 2017, all drone flight restricted over all DOE facilities for the welfare of national security. These include nuclear assembly facilities, laboratories, and research centers.

Another joint announcement, the FAA together with the Department of the Interior (DOI) declared back in September 2017 that all drone flight near famous landmarks and monuments were prohibited. The flight restriction covers the 400-foot radius area of lateral distance from the site in question.

The list of areas covers just about any famous landmark you can think of – the Statue of Liberty, Mount Rushmore, the Hoover Dam, and the Folsom Dam among others. Authorization to fly in these areas can be granted by the FAA upon request, and each application needs to be evaluated individually.

US Coast Guard and Naval sites

In an announcement made in June 2018, the FAA, DOJ, and DHS jointly declared US Coast Guard facilities and US Navy vessels as areas restricted for drone flight. Any drone operation is required to maintain a distance of at least 3000 feet laterally and 1000 feet vertically from these facilities and vessels. This announcement was made in the interest of national security.

Drone pilots who do not comply with this directive may face civil or criminal charges. The vessels of the USCG have also been authorized to take protective measures should there be drones observed in the area which they deem to pose threats to safety or security.

While there are no FAA restrictions on drone flight over National Parks, the National Park Service (NPS) declared back in 2014 that all drone flight is restricted in all areas under their authority. This includes not just more than 400 National Parks but also mountain trails, rivers, biking trails, monuments, battlefields, and seashores.

The NPS made this broad declaration in the interest of the safety of park visitors, staff, and the wildlife that treat these sites as their homes. While the NPS may grant authorization for drone flight upon request, it typically is only granted for reasons related to scientific studies or research.

Parks and schools that are under the mandate of city or state governments can be a complicated matter for drone pilots. Different states and cities may implement their own sets of laws regarding drone flight, likely as a response to concerns over safety, security, and privacy. There is no national standard here – there are state parks that have no problems with drones and others that are very adamant about restricting them.

The same can be said of schools. Young kids, cameras, and strangers are never a good mix, so it’s best to exercise some prudence and good judgment if you find yourself flying your drone close to one. Unless you have the authorization and it’s absolutely necessary, we suggest steering clear of schools when flying your drone.

If you’re unsure about local laws, then it would be best to ask law enforcers or park authorities. You can also try looking at a park’s official website or for relevant signs posted around the park. A few minutes of preparation can save you the hassle of getting questioned by law enforcement, having your drone confiscated, or paying a hefty fine.

Regulation is always a double-edged sword, and this applies to drone operations. While the FAA has legitimized both commercial and recreational drone flight, they also imposed quite a lot of restrictions. The “No Drone Zones” we have listed here constitute a major part of these restrictions, although they understandably address a lot of issues related to airspace safety and national security.

As restrictive as these rules may feel now, the reality is that we probably haven’t heard the end of it. Geofencing has started to become a thing to automatically ground drones when they enter no-fly zones. The FAA is also moving forward with the proposal for a Remote ID – a system for drones to be identified and traced back to their pilots.

Not many people know for sure where the drone industry is headed. While the market value of drone-based services is unquestionably huge, the FAA is also tasked with regulating drone operations to avoid compromising safety and security. It’s a delicate balance and a job we do not envy.

What Certifications Can You Get as A Drone Pilot? 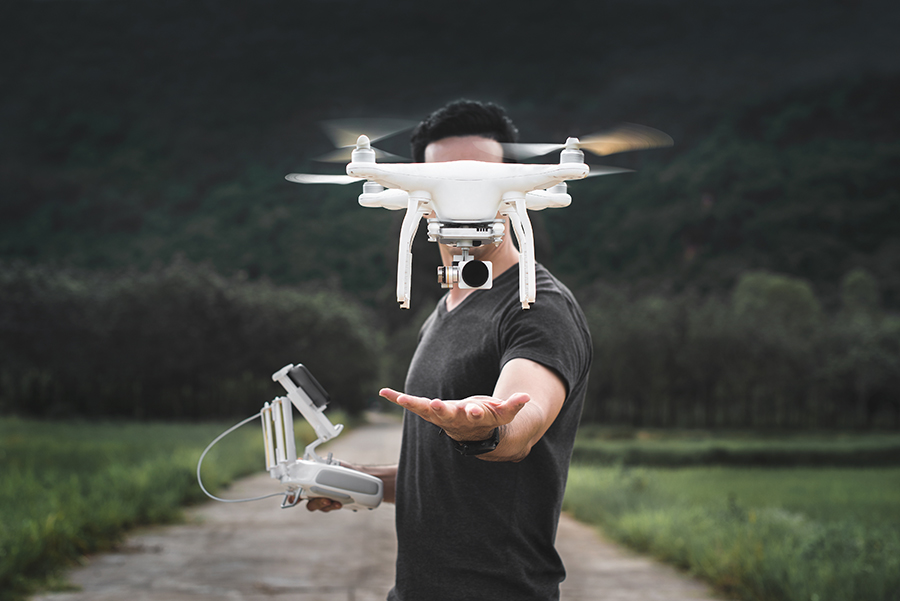 What Factors Affect the Cost of Drone Insurance?

Tips on Bringing a Drone on Your Next Airplane Flight (TSA)