Ever since drones have been a thing, the concept of using them for parcel delivery has always been on the verge of becoming a reality. The appeal is easy to understand. With drones, parcels can be delivered faster, cheaper, and without contributing to road traffic or vehicle emissions.

However, it’s now 2021 and drone delivery remains nothing more than a nice concept. What has been holding back drone delivery from taking off and have there been any favorable developments? Which companies seem firmly invested in drone delivery and how soon can we expect our parcels to be delivered by drone?

The business advantage of drone-based delivery is substantial. This has prompted several companies to attempt to become early adopters of the technology, even in the absence of a robust regulatory framework to support it. These are just five of the major players – there are a handful of others out there. 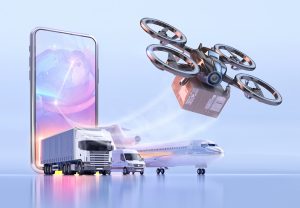 As one of the largest retail companies in the world, it’s no surprise that Amazon is heavily invested in this venture. The Amazon Prime Air project was announced way back in 2013 but only had its first demonstration in 2016.

Using a drone, a parcel was delivered from a fulfillment center in Cambridge, England. Following this demo, a short public trial was offered in the same area.

Over the long run, Amazon Prime Air plans to operate a fleet of drones that carry out delivery autonomously. To this end, Amazon Prime Air has applied for an airworthiness certificate for their specially made MK27 line of drones. The prototype drone indicates that it’s a hexacopter with a hexagon-shaped frame.

The MK27 drone has received FAA clearance as of August 2020. With this development (and other regulatory developments), we can expect Amazon Prime Air to continue doing trail runs perhaps in US airspace.

UPS is another big player in this industry through their UPS Flight Forward subsidiary. Formally launched in 2019, UPS partnered up with startup company Matternet to go into this venture. UPS Flight Forward also holds the distinction of being the first company to receive a Part 135 standard certification from the FAA that allows them to operate a drone delivery network in US airspace.

UPS Flight Forward is currently operating a service to regularly deliver medical samples and specimens to the WakeMed hospital in Raleigh, North Carolina. With the success of this trial delivery service, UPS plans to expand it to more hospital campuses across the country.

Just like UPS, DHL is looking to the use of drones for faster and innovative logistics. The DHL Parcelcopter project took its maiden flight back in 2013 when it transported a single parcel over a distance of only 1 kilometer.

Since then, the fixed-wing drone of DHL had progressively become more advanced. The Parcelcopter 2.0 made regular 12-kilometer flights traveling at speeds of up to 18 meters per second. Best of all, the flights were completely automated and only had to be monitored from the ground.

The Parcelcopter is now on its 4.0 version. During tests, it has completed a flight of over 60 kilometers in only 40 minutes on average. With a coverage of over 2200 kilometers and 2000 minutes of flight data, we can only imagine that DHL and their partners continue to work on the next big iteration of this technology.

For the initial rollout, DHL plans to use the Parcelcopter for the delivery of hospital and pharmacy supplies to far-flung areas in East Africa. Through the use of drones, poor road infrastructure no longer has to be a hindrance to delivering essentials to the areas that need them the most.

Flytrex offers an on-demand door-to-door drone delivery service for businesses, retailers, and individual customers. This is through the use of a quadcopter with a delivery box attachment which can be gently lowered to the ground using a wire release mechanism.

The concept was first tested in the city of Reykjavik in Iceland. Partnering with a local e-commerce company, Flytrex provided drone-based food delivery. Successful in this venture, Flytrex then offered the same service for the King’s Walk golf course in North Dakota. Using drones, food and beverages can be delivered to golfers quickly even while they are in the middle of a game.

The drones of Flytrex can carry up to 6.6 lbs. and travel a distance of 3.5 miles and back. They cruise at 32 mph, which covers a lot of ground considering that they are do not have to traverse roads and are unaffected by traffic.

Boeing is focusing on an entirely different market compared to the likes Amazon and DHL. Instead of parcel delivery, Boeing is developing autonomous systems for giant cargo delivery.

Aptly named “cargo drones”, Boeing’s prototype unmanned aircraft is a 747-pound fixed-wing model that can carry up to 500 pounds of payload. The concept was further refined, giving way to their first outdoor drone delivery demonstration in 2018.

The aircraft used for the demo was called a Cargo Air Vehicle (CAV). Instead of a fixed-wing design, this was a hybrid that features six dual-rotor systems and a fixed-wing build. This gave the CAV the distinct ability to take off and land vertically, yet glide efficiently using the concept of aerodynamic lift.

Right now, Boeing has a veritable lineup of unmanned aerial vehicles that are mostly used for military surveillance and data gathering. We have yet to see any significant developments on the cargo drone line, although we don’t believe that Boeing has abandoned the idea yet.

The challenges of drone delivery

Despite large names taking the lead in developing the technology for drone delivery, we still have not seen it beyond quick demonstrations or services offered in very small areas. What is holding up this groundbreaking development in logistics? 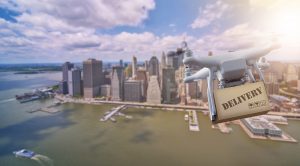 Even if a drone were able to fly completely autonomously, two things limit exactly how far it can fly – its battery and its communication link to the central controller. While battery technology has gotten so much better, controlling a drone via radio signals over long distances remains a problem.

The problem with radio transmission is that it’s unpredictable and can be compromised by factors such as the presence of large structures and sources of signal interference. A solution would be to place regularly spaced controller “hubs” to create a wide drone delivery network. However, this is going to be an expensive infrastructure. 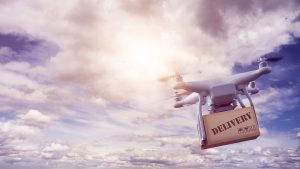 Delivery vans can fulfill orders in all but the most severe weather conditions. Drones, on the other hand, will end up with fried electronics at the first sign of rain. Operating a fleet of drones is challenging because any single one of them can be knocked out of the sky by a gust of wind or a predatory bird.

This puts into question the reliability of a system that relies on drones to make deliveries. In case of bad weather, there still needs to be backup methods that rely on land vehicles. If this is the case, will investing in drones still be a good business plan?

Even with the increased popularity of drones, a lot of people are still averse to the idea of seeing them buzz above their homes. Some people have even resorted to shooting them down (which is a criminal offense).

If drone delivery becomes a reality, then we will surely see an exponential increase in drones flying in the sky particularly near fulfillment centers. Whether the public is ready for this scenario is still a question.

When any car on the road gets into an accident, the concerned parties quickly jot down its plate number. This allows the car to be traced to its owner, making it almost impossible to commit a crime using a car and not be identified.

If drones become more common because of drone deliveries, then a similar system to a car plate will be necessary. This will hopefully dissuade the malicious use of drones – of which we already have too many documented cases. Perhaps this is the only way for the general public to be comfortable with the idea of fleets of drones flying around near them.

Drone delivery is considered a type of commercial drone service. As such, it has to comply with 14 CFR Part 107 rules. Among the most important provisions of Part 107 is that drones are not allowed to fly directly over moving vehicles and people who are not directly participating in the operations.

This is virtually impossible for any large-scale drone delivery service, particularly in urban areas where they are arguably most needed.

All things considered, the challenges that drone delivery companies need to face are multi-faceted. Not only does the technology need to be developed further, but there are also hurdles in terms of federal regulations and social acceptance. The good news is that things have somehow taken a favorable turn in the last couple of months.

Relaxed regulations on the horizon

In January 2021, the FAA released the final ruling on changes for certain provisions in Part 107. As far as drone delivery is concerned, the most significant of these changes is the lifting of the restrictions on flying drones over people and moving vehicles. 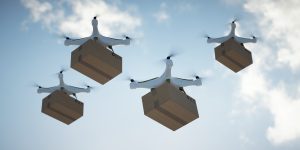 However, these changes come with new safety measures. Drones now have to be classified under any of four categories depending on how much damage or injury they can cause if they crash. We have already written about this in more detail in a previous article.

Although these new rules technically become implemented in March 2021, drone manufacturers still have their work cut out for them in classifying drones into the categories. This categorization needs to be vetted by the FAA, after which each drone model should have a Declaration of Compliance (DOC) document.

All this means is that service provides for drone delivery need to have their drones tested and classified into the FAA’s categories. Only with the granting of the DOC by the FAA can drones start flying over people and moving vehicles without violating any laws.

For years, people have been talking about using drones for delivery. Outside of tech demonstrations, we have not seen this technology at any significant scale yet. Despite the involvement of huge companies, there are still several hurdles for the concept to clear before it becomes a reality.

The good news is that these startup companies continue to soldier on. If recent changes made by the FAA are any indication, the federal government is also quite supportive of creating more ways for drones to be commercially valuable. We are optimistic that the changes to Part 107 restrictions will accelerate the development of this technology. Otherwise, this is a concept that we will continue to talk about but never actually see. 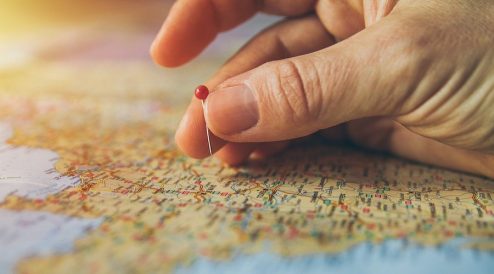 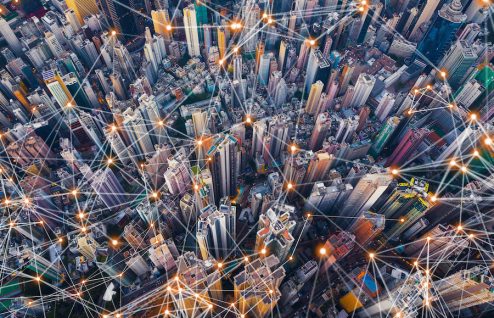 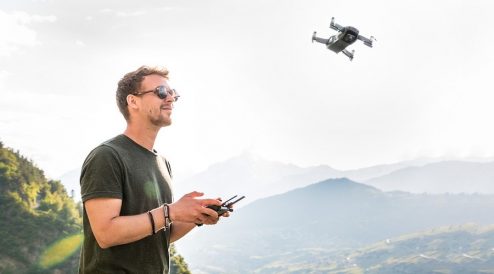