Despite the never-ending debates, the science is pretty clear that climate change is a very real problem and one that we need to address as soon as possible. As global temperature rises and natural disasters have more serious consequences, we must now turn to technology as a means to undo whatever damage we have done to our planet.

To this end, many environmental conservation groups have started using drones as tools for surveillance and data gathering. How exactly are drones being used in this campaign and how can professional drone pilots contribute?

An unfortunate consequence of climate change, coupled with uncontrolled population growth, is a global food shortage brought about by drought in agricultural areas. Cloud seeding has been explored as a way to counteract this effect. This is a method in which an aircraft releases silver iodide in the clouds in the hopes that they act as nuclei for cloud condensation, eventually producing rain.

While cloud seeding isn’t exactly a new technique, the use of drones instead of manned aircraft is a new approach to the method. Adam Watts and a team at the Desert Research Institute in Nevada is currently testing the viability of drones for cloud seeding. While the research is being done in the context of battling forest fires, the team also recognizes its potential value for responding to heatwaves and droughts.

If drones can be used as an alternative to manned aircraft, they can pave the way for faster and less expensive cloud seeding operations. However, there are a few challenges, such as the limited payload that a drone can carry and whether they can reach the needed altitude for successful cloud seeding. There’s also the existing uncertainty on whether cloud seeding works at all – science is still inconclusive on this matter. 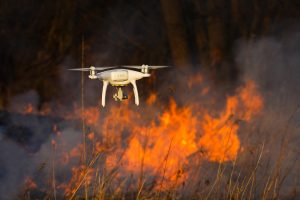 Even without cloud seeding technology, drones are already being used in various parts of the world to help in suppressing forest fires. Whether natural or caused by human actions, forest fires are some of the worst consequences of climate change as they further worsen the problem and commonly cause significant property damage, not to mention put human lives at risk.

In 2019 alone, forest fires in Australia, Africa, Indonesia, and the Amazon resulted in the loss of more than 12 million hectares of tree coverage. If similar forest fires aren’t prevented in the future, the planet could see a heavy dwindling of its natural carbon sink and a significant loss in biodiversity.

Drones have been used by firefighting teams around the world to aid in both the prevention and suppression of forest fires. In China, a computer engineering researcher has been working on a drone-based autonomous early warning system to prevent fires from happening in the first place by using a combination of GPS navigation and intelligent flight features to identify potential wildfire threats.

If a forest fire has already started, firefighters can use drones to gather data about the area so they can allocate what limited resources they have more strategically. There have been a lot of different approaches to this, such as dropping “Dragon Egg” glycol-filled balls for controlled burning and the use of NDVI sensors to determine how combustible specific patches of vegetation are. 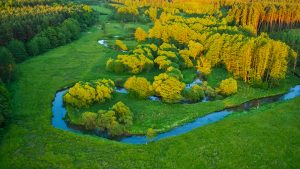 In South Africa, drones have been used as an alternative means of monitoring wildlife populations and analyzing their migration patterns. This technology has allowed wildlife biologists to continue their efforts in conservation without having to expose themselves to the hazard of working closely with animals.

For context, 91 scientists have died between 1937 and 2000 while they were doing wildlife monitoring activities in the field. 30 of those were due to helicopter crashes, likely as a result of flying at altitudes low enough to allow for accurate data gathering. Most of the others were due to animal attacks and other related accidents.

According to Leanne Hanson from the US Geological Survey, drones can potentially “change the way that data is collected”. No longer do wildlife biologists and other scientists need to physically expose themselves to the natural hazards of wildlife just to take photos of animals or track their movement. Moreover, drones are much less disruptive to the natural behavior of animals than having people on the ground or a helicopter flying by.

Biologists have also noted that wildlife data collected by drones were more accurate and that surveys can be done much faster. Making the switch to drone technology has proven to be a huge win for the wildlife conversation community.

The other, uglier side of wildlife conservation is the never-ending struggle to keep up with poachers. This is a problem in just about any region in the world where wildlife is abundant. Whether it’s in Australia or Africa, poachers present a danger to both the wildlife and the scientists who seek to protect them.

The problem with poachers is that they know they are being monitored. However, drones can tip the scale towards the side of wildlife conservation, given how excellent they are for surveillance. Drones can be deployed at a moment’s notice, travel quickly, and have special tools that can detect and track poachers even under the cover of darkness or vegetation.

Nowadays, drones are even designed with smart features built into their thermal imaging capabilities. This means that a drone can be programmed to identify a thermal anomaly and try to follow it around automatically. This can provide critical information on where poachers are stationed or where they bring the animals they hunt. Even clues such as a herd of fast-moving animals can be detected via thermal imaging.

This information can then be relayed to rangers on the ground, who are more equipped to deal with the poachers. Through this method, rangers will no longer need to spend their energies on less than fruitful pursuits.

Maintaining the health of forests is a huge part of battling climate change. However, the sheer scope of work to gather data on an entire forest can be overwhelming, even for a large team of scientists. Doing surveys on the ground isn’t just time-consuming and impractical – it can also be dangerous given the wildlife and various geological hazards.

Scientists and researchers worldwide have taken to using drones to monitor how vegetation responds to changes in weather. This isn’t just visual inspection, either, as drones can be outfitted with special sensors that can detect the photosynthetic activity of plants or how much moisture they have.

By analyzing the reaction of vegetation to climate change, scientists can come up with better corrective actions or come up with more convincing proposals for policy and legislation. Drones are particularly suited for monitoring data change over time, as they can be programmed to fly along the same flight path automatically, ensuring better data accuracy.

Drones aren’t just useful in gathering data about forests. In some cases, drones have been used as tools for active reforestation efforts. At the rate at which the world is losing its forests, it’s clear that we need all the help from technology that we can get.

A handful of drone startup companies have come up with the means to plant seeds using drones. Using a pneumatic launcher, drones such as those developed by Flash Forest can plant anywhere between 10,000 to 20,000 seed pods per day. The pods can even be packed with a special compost mix that speeds up germination.

Researchers from Japan’s National Institute of Advanced Industrial Science and Technology have also approached the problem, albeit at a smaller scale. Their half-ounce drone, which fits the palm of a hand, can pollinate individual flowers.

After the planting phase, the same drones can be used by the researchers to monitor the growth of their plants. If successful, drones can provide a method for reforestation that is quick, safe, and cost-effective. Some researchers have stated that we need to plant about a trillion trees to serve as a carbon sink for what we are producing right now. If drones can plant trees ten times faster than humans, then they seem to be more equipped for the task.

Nowadays, any infrastructure development project is expected to take a more sustainable approach. It should not encroach on protected areas, disrupt a natural ecosystem, or display any community of endemic species. This is where drones can be useful once again.

Using drones for planning construction projects is nothing new. Drones have been used to map the terrain of a potential construction site, allowing project managers to make measurements on how much they need to excavate and which roads they need to build to transport heavy equipment to the site. Even while construction is ongoing, regular drone inspection is often done for progress monitoring and to provide another level of guarantee of a safe environment for the workers.

On the sustainability side of infrastructure, drones can be useful in ensuring that a project has as little ecological footprint as possible. All the information that a drone can collect with regards to vegetation health and wildlife behavior can be useful in working towards this objective. With nature-centric planning, a park or commercial facility should not disrupt wildlife migration routes or nesting locations.

The presence of waterways can also be noted with a drone survey, especially in remote areas where these bodies of water are used by local communities for domestic activities. 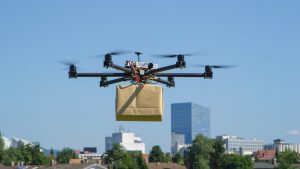 According to research by Hitachi, the growth of urbanization has meant that around 55% of the world’s population now lives in urban areas. A consequence of this is that a significant population now do their shopping online or have their regular supplies shipped. Industry estimates say that we can expect 500 million deliveries made to urban areas by the year 2025. Without a doubt, the global pandemic we’re going through right now has boosted those numbers even further.

At the size of the parcel delivery industry, its carbon footprint can no longer be ignored. Back in 2010, a study done in London indicated that freight transport alone was responsible for around 38% of the city’s nitrogen oxide emissions.

Drones can provide a more environmentally friendly alternative to parcel delivery. For years, major retailers and delivery services have been exploring this concept – Amazon, Walmart, and UPS are just some of the brands that have some skin in the game. If drone deliveries become the standard, we should significantly fewer delivery trucks on the roads.

As the years go by, it’s becoming more and more apparent that climate change is a problem that can no longer be ignored. If we want to provide a habitable planet for the next generation, then we must exhaust every single option to hamper or reverse the effects of global climate change.

Drones are just an example of modern technology that can be leveraged to help with the fight against climate change. Despite the size of these drones, they can help in huge ways, practically multiplying the output that can be done by people. If you’re a drone pilot who’s looking to make a significant change for the planet, any of the applications we have listed above should be quite fulfilling. 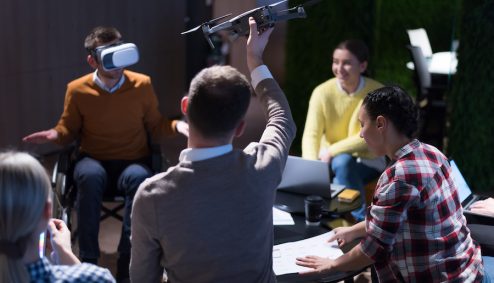 Should You Get DJI Drone Financing Through Affirm?