Data security has slowly become a serious topic in drone operations. Two years ago, the Department of the Interior decided to ground their fleet of Chinese-made drones over concerns over potential security risks. Ordinary drone pilots are also worried about their personal flight data getting intercept when Remote ID becomes strictly implemented.

With data security in mind, many companies offering solutions to drone operations have started turning to blockchain technology. What exactly can blockchain offer to the drone industry? Are there any examples of drone devices that already use blockchain?

The blockchain is a centralized digital ledger of transactions that is designed so that any transaction data cannot be changed or hacked. A blockchain network can be made visible to any permitted network members, giving each of them accesses to the same version of the data in real-time.

Each transaction in the blockchain is recorded in individual blocks. Each data block can record any set or type of information. In the case of drones, this can be telemetry data, the personal information of the pilot, and the drone’s flight route. This data block is connected to a previous block and followed again by another block. With the blocks linked together, they can no longer be removed or altered.

By far, the most high-profile application of blockchain technology is cryptocurrency. This refers to a digital currency that is stored as transactions in the blockchain. As this currency is not held by any single bank or financial authority, cryptocurrency can be traded between two parties without having to deal with third-party authorization. Cryptocurrency is immune from the effects of inflation and exchange rate volatility.

The benefits of blockchain to drone operations must be contextualized by different perspectives. One perspective will come from government institutions such as the Department of the Interior that use drones in a national security capacity. There are also professional drone pilots and business owners who often collect data that should remain private to their clients.

For casual drone owners, data security can still be a serious issue when the Remote ID requirement comes around. In about two years, all drones in the US must have Remote ID modules that continuously send out packets of data. This data can include a drone’s registration information as well as the current location of the base station or drone pilot.

In all these scenarios, there is an inherent risk of data falling into the hands of malicious parties. Any wirelessly transmitted data is prone to hacking, interception, or alteration. It is also common for user information and backup flight data to be stored in third-party servers. This can be problematic if drones are being used in operations related to national security.

Proposals for blockchain-based drone data storage can solve most of these issues. One unique characteristic of blockchain technology is that ownership of data can remain with the person from which the data came. This will likely be the drone pilot. This is because the data is hosted in the blockchain, instead of in the servers of the drone manufacturer.

Cutting the cord between the drone manufacturer and any user-generated data is only the first step. This data must then be kept private, with the drone pilot able to control who gets to access the data. This can be done by issuing public keys that allow the data to be decrypted by clients, law enforcement officials, FAA officials, and other representatives from the federal government.

The nature of data in the blockchain is that it cannot be changed once it has been recorded. This immutable data creates a foolproof system for accountability and trust. When applied to Remote ID, this ensures that all telemetry and flight data cannot be tampered with. Should a pilot fly beyond the scope of what is allowed by the FAA, this data will be recorded in the blockchain permanently and can be used as evidence for any litigation. This would likely encroach upon privacy rights though.

Transparency is another strong suit of blockchain technology. Everyone who has access to a blockchain network can see the same version of any data block. Accessing the data creates another transaction which is also recorded on the blockchain. For drone pilots, it means that they can see exactly who accessed their data, and where and when the access happened. For clients, this gives them the privilege to see that data in real-time as it is generated and the assurance that the data has not been altered.

The transition to 4G or 5G-enabled drones flight is expected to give way to automated drone fleet operations and flight that is in the BVLOS range. However, this underscores the need to secure the data link between the drone and the ground station. There have been proposals to use blockchain-based architecture to control access to flight data via the execution of “smart contracts” – self-executing programs that contain access control rules and the logic of permitted transactions that are sent to trusted peers in the network.

All these potential applications of blockchain to secure drone operations aren’t just theoretical. Numerous startup companies around the world have been quite busy developing actual blockchain-based systems in the last few years.

One of the more advanced solutions that are already being used is the VaultIC4xx technology by WiseKey International Holding. WiseKey is a company that specializes in cybersecurity and Internet of Things technology. VaultIC4xx is already being used in Parrot drones and has been certified by the US National Institute of Standards and Technology (NIST) following one of the strongest and globally recognized digital security levels.

Earlier this year, WiseKey announced that their digital security solutions can be used to comply with the FAA’s new Remote ID requirements.

Another worthwhile entry comes from Korean company KYON, Inc. The company’s Project DRONEFLY is a flight tracker that records real-time flight information. This data is then encrypted and stored in a blockchain.

Testing of the real-time flight data collection has been finished as of August 2021, while the AI and blockchain capabilities will be developed later on. KYON envisions that DRONEFLY will be considered a “BlackBox” for drones and that it will be a staple hardware upgrade for drones within two to three years.

The DroneBox by RedCat is another product that aims to be a BlackBox for drones. Aside from secure and encrypted storage, DroneBox also offers AI analysis of flight data to help generate summarized reports. This is very useful for fleet operations.

In 2019, there was news of RedCat partnering with GoChain to develop scalable blockchain solutions. This technology was presumably going to be integrated with their drone BlackBox products for foolproof data security. There were no further updates on the products of this partnership, although the DroneBox seems to be still using a blockchain-based architecture.

Lastly, a research paper published in the Sensors Journal just this year describes a blockchain-based system for unmanned traffic management of drones. The researchers coined the system “UTM-Chain”. The proposed architecture uses a cloud server to do complex processing of any data that the drone collects. However, all user actions and data collected from the drones will be stored in the blockchain.

The blockchain also plays a secondary role in executing smart contracts to allow other users to access the off-chain cloud database. This can be used to provide access to relevant authorities who should be monitoring the drone operations as part of the UTM network. As per the nature of blockchain, the owner of the data has control over who can access the data. Any attempts to access the data are also recorded in the blockchain, making unauthorized access traceable if not impossible.

This is but a small sampling of the proposed ways in which blockchain technology can be harnessed to secure drone data.

As drone operations expand for governments, professionals, and hobbyists, there is now more focus on protecting the data generated by drones. This will become more important in the coming years as Remote ID becomes a requirement and Unmanned Traffic Management systems become more prevalent.

Blockchain is still considered an emerging technology, so it is far from being the standard for drone data security solutions. When Remote ID becomes required, we can still expect the traditional security architecture provided and hosted by third-party service providers. The decision falls in the hands of the drone pilot – which type of architecture do you trust more?

Tips on Bringing a Drone on Your Next Airplane Flight (TSA) 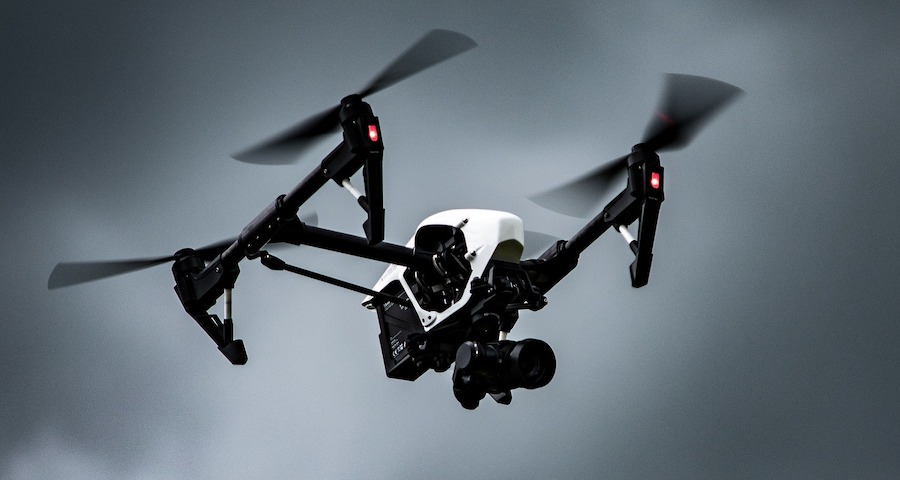