Most airline passengers simply accept the fact that passenger jets fly very high. They rarely ask about it, or want to know what altitude is used. But there are good reasons for how high planes fly.

In fact, the common cruising altitude for most commercial airplanes is between 33,000 and 42,000 feet, or between about six and nearly eight miles above sea level. Typically, aircraft fly around 35,000 or 36,000 feet above sea level. This is why when you are on a long flight, you will generally hear the captain say something like, “Ladies and gentlemen, we have now reached our cruising altitude of 36,000 feet”.

Commercial airplanes can theoretically fly a little higher than this, and of course they can also fly lower if they choose to. But small aircraft such as those flown by private pilots cannot fly this high, and usually do not go above 10,000 feet. Indeed, they often fly much lower than this.

There are a number of reasons for all of the above, which we will take a look at now.

The main reason for airliners flying so high is that it saves fuel and therefore saves money, which is always a priority for airlines. The air becomes thinner as the altitude increases, and thin air creates less drag on the aircraft. In addition, jet engines operate more efficiently at high altitudes, meaning the plane can travel faster while at the same time burning less fuel.

However, a plane’s engines need oxygen in order to function, so flying too high can also cause problems. Plus if a plane goes higher, it has to burn more fuel in order to get there. So there has to be a balance, which is the reason for the fairly specific altitudes generally used by airliners. 35,000 feet or thereabouts is the altitude at which fuel efficiency is greatest, while there is still enough oxygen available to power the engines.

Avoiding Traffic and Other Hazards

Flying higher means that commercial airplanes can avoid most other airborne traffic. At the altitudes they use, there will be no light aircraft and helicopters, and no drones, which all fly much lower.

Birds rarely fly that high, which is important, as bird strikes, though rare, can be disastrous if they happen. An extreme case of this sort of disaster was the US Airways aircraft which was forced to land on the Hudson river after a bird strike. This sort of thing is extremely unlikely, but it does happen occasionally. 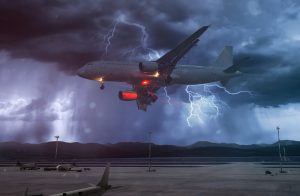 It is not essential for aircraft to avoid bad weather, but it is a good idea. Commercial airplanes usually fly above the troposphere, which is the part of the atmosphere where weather events usually happen. The troposphere is usually said to finish at 36,000 feet. This is why when you are cruising in an airliner, it is usually bright and sunny, with all the cloud and rain below you.

Turbulence is less common at high altitudes too. Again, airliners can generally cope with turbulence, but it is preferable to avoid it if possible.

Over 42,000 flights take place every day, with 5,000 planes in the sky at any one time, according to the FAA. With this much traffic, there has to be some official arrangement to make sure collisions do not happen, and there is.

There are certain rules for exactly where airliners can fly, and the direction of travel can affect what altitude they will climb to. Planes flying eastward, including northeast and southeast, will fly at odd altitudes, such as 35,000 feet.  Planes flying in approximately westerly directions have to fly at even altitudes. This means that planes flying in opposite directions to each other are at least 1000 feet apart, so avoiding a possible collision and making for safer flights.

Lastly, flying high gives you more time to act in the unlikely event of an emergency in flight. Modern airliners are incredibly safe most of the time, but should something happen which means an emergency landing is required, high altitude gives the pilots much longer to sort things out and find a safe place to land.

On the other hand, flying too high could have negative safety issues. In some emergencies, such as a rapid decompression, pilots want to return to a lower altitude as quickly as possibe. So again, there has to be a balance, which accounts for the altitudes generally used.

A Word About Light Aircraft

While jet engines operate well at high altitudes, the same is not true of piston engines, which are typically used for light aircraft of the type flown by most private pilots. Piston engines do not operate well in thin air, and this is one of the reasons why most small planes fly at altitudes of below 15,000 feet. 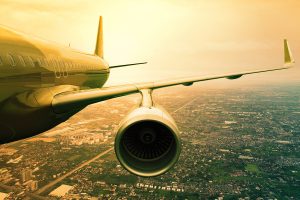 But in fact, small aircraft generally fly much lower than that for a variety of other reasons. This is partly because they tend to fly shorter distances, and pilots simply do not want to spend too much time climbing and descending on a short flight; it just isn’t worth it. Also, most small planes are not equipped with oxygen, which would be necessary if they were to fly too high. It is probably not really safe for them to be much above 10,000 feet. And a substantial majority of small planes are flown for recreational purposes, and pilots enjoy flying lower, where they can see things below them. This is not a factor in commercial flying.

However, legally planes must be at least 1000 feet above any object on the ground, and must be able to land clear of any congested area in the event of an engine failure. Therefore small planes generally fly between 2000 and 10,000 feet. It all makes sense when you know the reasons for it!

It should be noted that every airplane has a certified maximum altitude. During test flights this maximum is exceeded slightly to verify the that airplane remains safe should it have cause to ascend from that limit. The highest certified altitude of an airliner was Concorde’s 60,000 feet. Today some of the corporate jets can fly at 51,000 feet.

However, for all the reasons mentioned above, this is mainly theoretical, and most commercial airplanes fly much lower than this.