Airspace restrictions have been one of the most controversial issues among drone pilot communities. Much of the efforts by the FAA on drone regulations have been for the goal of avoiding any close encounter between drones and manned aircraft, which may have potentially disastrous consequences.

Despite having so many restrictions in place, sightings of drones in controlled or restricted airspace continue to be a problem with several incidents being reported practically daily. For this reason, drone manufacturers have also started to propose and implement technical safeguards to address this issue.

In this article, we take a deep dive into DJI’s airspace approval system and contrast it with the FAA-based counterpart. Are the two systems related? How are they different?

When is FAA approval needed?

One of the restrictions that are found in both the Part 107 rules for commercial drone pilots and the guidelines for recreational drone flight is the prohibition for flying of drones in controlled airspace. Controlled airspace typically occurs in the areas immediately surrounding the airport. The size and shape of an area of controlled airspace depend on the density of air traffic that regularly passes through the airport and the orientation and size of the runway.

Fortunately, the restriction against flying drones in controlled airspace isn’t absolute. The FAA recognizes how many airports there are in the US, and issuing a blanket restriction would severely hamper the drone industry. For this reason, the FAA allows drone flight in controlled airspace for drone pilots who request their approval. The approval that the FAA grants are subject to strict conditions, such as a pre-defined area and an altitude ceiling.

How do I get FAA authority to fly in controlled airspace?

Under FAA’s old system, Part 107-licensed drone pilots had to apply for an airspace waiver to be allowed to fly in controlled airspace. This was a long process that involved a lot of forms to be filed and a maximum 90-day waiting time. Thankfully, the process has been overhauled in favor of a much faster and more convenient alternative. Although the waiver system still exists today, it’s no longer the prescribed method for requesting airspace approval.

Recreational drone pilots had it worse. Up until a few months ago, recreational drone pilots had no formal system for requesting permission to fly in controlled airspace. Thus, they used to fly near airports with the presumption that there were no rules that were prohibiting them. This, however, did not address the potential hazards of such activity.

In 2017, the FAA launched the Low Altitude Authority and Notification Capability (LAANC). This is a system that allows drone pilots to request for airspace authorization directly to the FAA and to receive almost real-time confirmation. The LAANC was a collaborative effort between the FAA, drone-based communities, manufacturers, and operators.

The benefit of having a centralized system for airspace authorization is that it allows the FAA to fully document all drone flights in controlled airspace. It also eases the burden off the individual air traffic control (ATC) facilities that, in the past, had to field several calls from drone pilots who wanted approval to fly in the controlled airspace under their jurisdiction.

The LAANC approval system is offered by several flight planning software platforms like KittyHawk and Airmap. The exact process may vary slightly from one software to another, but the overall workflow is the same. To request for airspace approval, you just need to provide the following details:

After ticking a pre-flight checklist, you can then submit your request for airspace approval. The beauty of the LAANC system is that you can expect to receive a reply in just a few seconds or minutes. The approval will come in a text message that details the nature of your request and any conditions that the FAA requires that you comply to. Depending on the software you’re using, you can also download a PDF file of the FAA approval, which you can print later.

What the LAANC system doesn’t do

The LAANC system is a convenient tool for drone pilots who intend to comply with airspace-related restrictions on drone flight. However, going through the LAANC approval process is still largely a voluntary choice. For those who do not want to bother with getting airspace authorization, the LAANC system will not prevent them from doing so.

Right now, there are no consequences for drone pilots who fly their drones in controlled airspace with no authorization, unless they get caught or get into an accident. Any measures that penalize unauthorized drone flight in controlled airspace will then be reactive rather than preventive. This deficiency is exactly what DJI’s geofencing system seeks to address.

A few years ago, DJI made waves in the drone community when they first launched the Geospatial Environment Technology (GEO) feature in their drones. This geofencing technology was further enhanced with the GEO 2.0 version which added a vertical element. Nowadays, GEO 2.0 is a staple feature in all new DJI drones, with older models receiving the feature via firmware updates.

The geofencing feature provides a warning system to a DJI drone that reacts appropriately depending on its GPS location when it takes off. Under DJI’s very own Fllysafe Geo Zone map, they have defined several types of No-Fly zones. Depending on the type of No-Fly zone you’re in, you may have to go through either a Custom Unlock or Self Unlock process or simply receive a warning message.

How to get DJI approval in controlled airspace

The type of approval you’ll need to get will depend on the type of No-Fly zone where you’d like to fly your drone. There are six types of No-Fly zones as defined by DJI:

Of the six types, only Altitude Zones and Warning Zones do not require any form of approval. Altitude Zones are areas where you can fly only below an altitude ceiling for safety considerations. If you’re flying an Altitude Zone, your DJI can no longer gain additional altitude upon reaching the ceiling. When flying in Warning Zones, you will merely receive a warning message about any potential hazards in the area. However, you will not be restricted from flying a drone in any manner.

Getting approval for an Enhanced Warning Zone is only a little different. Just like in Warning Zones, a warning message will pop up when you attempt to fly a drone in an Enhanced Warning Zone. However, you will need to confirm that you understand the message and that you agree to bear the responsibility of any airspace-related accident that happens during the course of your operations. This will require you to merely press a button before your drone can take off.

At the DJI Self Unlocking, you will need to provide the time, date, and location of your planned drone flight mission. You will also have to indicate the model of your DJI drone and the serial number of your flight controller.

Upon granting the authorization, you will need to import the flight license to your drone through the DJI GO mobile app. The flight license will take effect on the midnight of your chosen date and will remain active for the next 72 hours.

A Custom Unlock can only be done through the DJI website, so it’s a good idea to secure one a few hours or days before your planned drone flight mission. You will need to provide the same set of details as with the Self Unlock procedure with the addition of the appropriate proof of authorization, whether that’s a LAANC approval or an approved waiver request. A Custom Unlock request is typically granted within an hour.

As with a Self Unlock, you’ll have to import the flight license to your DJI drone via the DJI GO app connected to your flight controller.

When the LAANC system was introduced, it was almost unanimously received favorably by the drone community. It was a massive improvement over the old approval system that was both easier and faster, giving commercial drone pilots more flexibility to practice their craft. Recreational drone pilots were also quite happy to be integrated into the system because it gave them the opportunity to finally fly in controlled airspace with no fear of legal consequences.

The geo-fencing feature of DJI, on the other hand, wasn’t received quite as warmly. This was an initiative by DJI that the FAA did not require, but DJI deemed it as a step in the right direction towards airspace safety. This may be true, but it does not discount the fact that it required more work for pilots of DJI drones. Many DJI owners were also caught by surprise when they found that they automatically had the geo-fencing feature when they updated their firmware.

The problem with GEO 2.0 was that it was an entirely different and separate process from what the FAA had established. This meant that you had to go through a two-step process if you wanted to fly in controlled airspace. You had to apply for LAANC authorization and use the approval document to do a DJI Custom Unlock. The additional step of getting a Custom Unlock essentially defeated the purpose of LAANC – which was to allow drone pilots to secure almost-instant airspace approval.

What can be done to improve the DJI geofencing system?

The GEO 2.0 has been quite problematic for DJI. Many DJI owners have taken to refusing to upgrade their firmware to avoid installing the GEO 2.0 feature. Other drone manufacturers have even bragged about NOT having a geofencing feature as a means to differentiate themselves from DJI. When your competitors brag about the absence of a feature that you developed, then it might be a sign that you’re doing something wrong.

The first step that DJI needs to take is to implement seamless interfacing between LAANC and the GEO 2.0 unlocking process. There shouldn’t be a need for drone pilots to go through an additional layer of red tape just they own a DJI drone.

A major complaint of drone pilots with GEO 2.0 is that it prevents them from even doing any testing. This is especially problematic if your house just happens to be located inside controlled airspace. A viable common ground would be to allow drones to fly within a very small altitude ceiling in Restricted Zones. Even 30 to 50 feet would be enough of an allowance just to allow drone pilots to do periodic tests with their drones or to simply fly their drones in their own backyards. A blanket restriction against taking off does seem ridiculous if you can’t even fly your drone inside your house’s garage.

Any form of regulations, especially for a new field like drone flight, will always feel like a process of pushing and pulling. While the existing restrictions may seem too lax, there may be changes made to an existing set of rules that feel too strict. It’s only upon listening to the response of the stakeholders and keeping an open mind that lawmakers will be able to come up with a set of regulations that are comprehensive and agreeable to everyone.

The first iteration of DJI’s geofencing feature may feel a bit restrictive, but there’s always hope of it getting changed due to user feedback. With geo-fencing and the recently proposed Remote ID system, drones will only continue to become smarter. Let’s hope that lawmakers and drone manufacturers don’t forget that there’s always a human element in the equation. 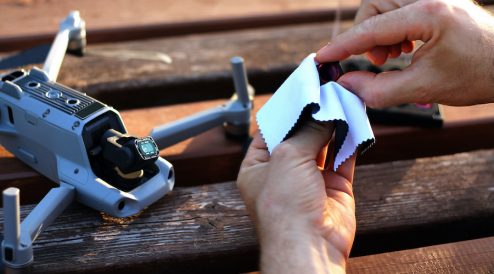 Tips for Flying Your Drone in Winter