The provision for visual line of sight (107.31) is included in the provisions for which the FAA grants waivers. So far, the FAA has only granted 57 of such waivers since 2016 – quite a low number compared to the total number of waivers they have issued. In fact, many drone pilots consider a 107.31 waiver to be the most difficult to secure. To improve your chances of being granted a Part 107.31 waiver, check out our sample waiver application.

The operations will take place along Highway 59 in Washington County, Utah. All operations will be done in Class G airspace. The nearest airport to the proposed location is the St. George Regional Airport located 16.2 miles to the southwest.

The highway runs NW-SE in a sparsely populated area along a corridor enclosed by mountainous terrain on both sides. There is little aviation in the area and no major bodies of water. The power lines to be inspected run along either side of the road.

For reference, the proposed location of operations is bounded by the following coordinates:

The proposed operations will be an inspection of the power lines running along Highway 59 in Washington County, Utah. This job was contracted out by the local utility company as part of their regular maintenance activities.

The waiver is being requested as the area measures around 10 miles end-to-end. The corridor defined by the power lines is also obscured by mountains, making it impossible to fly from one end of the corridor to the next while still maintaining visual line of sight. The crew is anticipating having to fly across the corridor multiple times to conduct both visual inspection and thermal imaging of the power lines. The presence of multiple power lines along the highway also expands the scope of work for this contract.

If granted, the waiver will significantly shorten the period for which drone operations will be necessary. The crew will only conduct the survey during the daytime.

The flight crew will be composed of at least three people – the RPIC and two visual observers (VO). The two visual observers can be located at strategic positions to extend the scope of visual line of sight for the operations. Each member of the crew will carry electronic devices for communication, with the RPIC having a provision for hands-free use.

The crew recognizes that such a strategy is no substitute for the RPIC maintaining visual line of sight with the drone. Even with communication aids, the RPIC will not be in a position to react in a timely manner should there be nearby hazards to the sUA. However, this strategy has the potential to identify hazards even as they remain hundreds of feet away from the drone’s current trajectory.

Prior to the operations, the crew will do a daytime survey of the proposed location. The goal of the pre-survey is to identify potential hazards and obstacles in the area and to establish at least three pre-determined landing or recovery areas. All the recovery areas must be clearly labeled, marked with the appropriate warning signs, and delineated with warning tape to keep out people who are not directly participating in the operations. The RPIC must also ensure that there are clear flight pathways to each one of the recovery areas.

The objective of the work is to capture optical and thermal images and videos of the power lines located along Highway 59. The power lines are located about 15 feet AGL. To avoid any problems caused by electromagnetic interference, the drone will maintain an altitude of at least 50 feet AGL.

The operations will be suspended immediately if the RPIC loses control of the drone, loses the video transmission signal, or cannot communicate with the VOs that are located remotely. Manned aircraft or non-participants on the ground entering the operations areas will also be grounds for calling a suspension of the operations. The RPIC will then maneuver the drone to either reestablish a control link or to land at any of the pre-designated recovery areas.

Describe how the Remote Pilot in Command (RPIC) will be able to continuously know and determine the position, altitude, attitude, and movement of his/her sUA or drone and ensure the sUA or drone remains in the area of intended operation without exceeding performance capabilities of the command and control link

VOs will be deployed at strategic locations within the proposed area of operations to maintain visual line of sight the sUA. Although this is not a sufficient substitution for the RPIC maintaining visual line of sight, the responsibility of the VOs will be to scan the skies for potential hazards near the sUA or along its flight trajectory. This is in recognition of the reduced field of view available to the RPIC when they have to rely on the drone’s onboard camera.

The ground station of the sUA will have a visual display that will relay real-time information to the RPIC regarding the drone’s position, altitude, and direction of flight. This information must be available to the RPIC at all times. Otherwise, the operations will be suspended.

Describe how the RPIC will avoid other aircraft, flying over/into people on the ground, and ground-based structures and obstacles at all times

Scanning both the sky and the ground for potential obstacles and hazards will be the primary responsibility of the two VOs who will be part of the operations crew. They will also be responsible for relaying such information to the RPIC and can recommend whether the RPIC should command the drone to hover in place or enact an evasive maneuver.

The sUA is equipped with an omnidirectional obstacle avoidance system that will help prevent it from crashing into stationary obstacles. This makes use of an array of sensors in the forward, backward, upward, downward directions and on both sides of the sUA. Testing of the obstacle avoidance system will be part of the sUA’s scheduled maintenance activities and pre-flight inspection.

The Responsible Party will issue a NOTAM not less than 24 hours before the operations that will detail the nature of the operations, its location, operating area, altitude, and time.

Describe how the visual conspicuity of the sUA or drone will be increased to be seen at a distance of at least 3 statute miles.

Under clear conditions, the sUA to be used is normally visible within the 3-statute mile range. Still, the conspicuity of the sUA will be enhanced by the application of high visibility markings and a strobe light. These will be deployed even during the daytime. Operations will be suspended if weather conditions reduce visibility to less than 3 statute miles.

The sUA to be used for the operations must have gone through regular maintenance procedures as prescribed by the manufacturer. All scheduled maintenance activities must be documented, including repairs, replacement of components, modification, an overhaul of the drone, and any software upgrades. At a minimum, the logs should include details on what type of work was performed, who conducted the maintenance, and when maintenance was done. Such logs must be kept by the RPIC and must be available for review by authorized representatives.

The drone must have undergone a functional test flight after each maintenance activity and within 7 days of the proposed operations. The results of each test flight must also be logged accompanied with details on who did the test flight, when it was done, the duration of the flight, and the registration number of the sUA that was tested.

Immediately before the proposed operations, the RPIC will perform a pre-flight inspection of the sUA following a prepared checklist. At a minimum, the parts and components to be checked will include:

What procedure will be followed to ensure the required persons participating in the operation have relevant knowledge of all aspects of operating an sUA or drone that is not in visual line of sight of the RPIC?

All the members of the operations crew will be trained in a manner that addresses all the items listed under this waiver. Compliance with this training will be confirmed by the Responsible Party. At a minimum, the training should cover the following topics:

The results of the training must be documented, and these logs must be In the possession of the RPIC and made available to an appropriate authority upon request.

Immediately before the planned operations, all members of the crew will undergo a safety briefing to be held by the Responsible Party. At a minimum, the following items must be addressed in the safety briefing:

Describe how the RPIC will operate the sUA or drone within the weather requirements while en route.

The RPIC will be responsible for checking the METAR and TAF for the date and time of the proposed operations. The operations will only proceed if there is no precipitation, visibility of 3 statute miles can be maintained, and the maximum wind speed (including gusts) does not exceed 15 miles per hour. The operations can be suspended at any point upon changes in the weather conditions beyond the prescribed limitations.

Before starting the operations, the RPIC must check that the control links to be used remain functional over the maximum planned distance. This must be done in an area where visual line of sight can be maintained.

In this section, all the information and documents will be summarized for your checking. Make sure that everything is in order before the final submission of your waiver application. Submitted applications under review by the FAA can no longer be amended. According to policy, the FAA does not accept additions or revisions to waiver applications that have already been submitted. 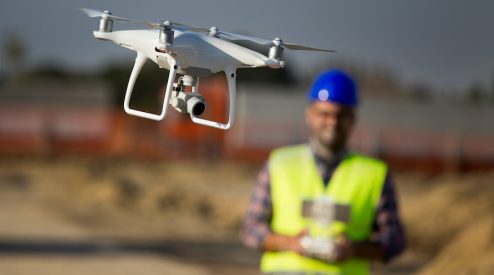 Drone License Guide: What It Is, Who Needs It, and How to Get It

How to Prepare a Pre-Flight Inspection Checklist for Drone Flight