Compared to manned aircraft, drones have quite the laundry list of advantages. They are smaller, cheaper, easier to manipulate, quicker to deploy, and can get into spaces that larger aircraft cannot. These benefits have made drones a very useful inspection tool for several industries, thus also providing professional opportunities for drone pilots.

Just how significantly has drone technology affected the aerial inspection industry? To help you get a sense of the size of this drone application, we have come up with a list of the many ways in which drones are used to inspect everything from farms to industrial equipment.

Inspection of power lines has become a prevalent field for drones in the past couple of years. Considering how critical power lines are as an infrastructure, it is essential that inspection of them be done according to maintenance schedules or in the aftermath of a natural disaster like an earthquake or typhoon.

The challenge of inspecting power lines is that they typically stretch for hundreds of miles. Having people come up close and personal with power lines to check for damage is also a very dangerous proposition, especially if you’re assuming that some of the power lines are damaged.

Drones offer just about all the advantages to counteract these difficulties. Drones can fly quickly, be deployed from just about any take-off spot, and do not expose a single person to any hazard when done correctly. They can also be equipped with a customized payload like thermal cameras or powerful zoom lenses to make checking for damaged power lines easier.

There are still a few challenges to overcome when doing power line inspection via drones, such as the need to maintain visual line of sight and the electromagnetic interference that live power lines generate. However, the benefit of using a drone as opposed to a helicopter far outweigh the drawbacks.

Air pollution continues to be a growing problem around the world, particularly in cities with a lot of vehicular traffic and industrial manufacturing facilities. In this regard, drones help not only in the monitoring of air pollution levels but also in actively reducing them.

In Wyoming, natural gas producer Jonah Energy has started using drones with mounted emission sensors to complement their fixed-location air pollution detection stations. This has allowed them to gather more comprehensive data for the concentration of volatile organic compounds and nitrogen oxides in the air, thus allowing them to better comply with federal air quality standards.

A similar effort has been undertaken by Anadarko Petroleum, which is the largest oil and gas producer in Colorado. Instead of emission sensors, the drones used by this company have been equipped with infrared to detect if there are any leaks in their surface facilities. This allows for faster leak detection, which means that ground crews can be instantly deployed to address them.

Aside from their value in inspection, drones have also been used in various cities to actively reduce air pollution. These applications have ranged from using drones to spray water and reduce suspended dust particles to using drones as a more environment-friendly option for parcel delivery.

Solar farms play a huge role in the global energy transition from fossil fuel-derived to more renewable sources. They have been placed at the forefront of this campaign in the last couple of years because of advances in photovoltaic technology, making solar energy easier to implement with less capital and lower risk. 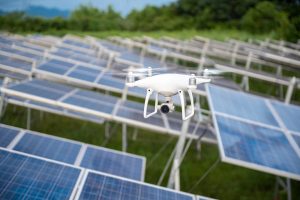 One of the challenges in solar energy is that it needs a lot of land, typically in the range of hundreds of acres. The large footprint of these “solar farms” make real estate costs a significant part of its expenses. Maintenance of solar farms is also difficult considering that one farm can have thousands of individual solar panels spread across a very wide area.

For many solar farms around the world, drones have become the best solution to facilitate maintenance and inspection needs. With a thermal camera, drones can simply fly over the whole breadth of the solar farm to look for panels with unusual heat buildup. This is a typical sign of a damaged solar panel.

As with any energy provider, reliability is a critical metric of a solar farm. Regular drone inspections can help solar farms ensure that a good portion of their solar panels is in good working conditions. With programmable drones, they can even fly along predetermined flight paths with minimal operator intervention.

Any type of large-scale offshore work is difficult to inspect on account of the site’s remote location. A common example of this is a drilling platform for oil and gas extraction in an offshore site. To inspection the status of these jobs, a helicopter would be typically be found hovering above the job site with an onboard photographer taking photos and videos. 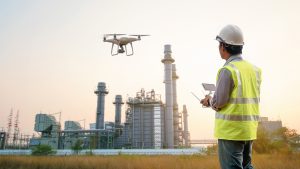 Now that drone technology is available, inspection of offshore construction sites can be done in a cheaper and less dangerous manner. Since drones are so inexpensive compared to a helicopter, a fleet of them can be operated to do a comprehensive inspection of an offshore site at closer intervals.

While drones aren’t exactly quiet, they are far from being as noisy as helicopters. This means that they will cause less disturbance to people working on the ground. Should something untoward happen during the inspection, the consequences of a drone crash are much less grave compared to a crash involving a helicopter.

Another benefit of using a drone to inspect an oil and gas facility is that it does not expose any person to unnecessary hazards. An oil drilling site may need to vent gases to avoid excessive pressure, which is burned in specially designed flares. Having a drone burn down because of a flare-related accident is simply a business expense, not a life-threatening situation.

Inspecting mining operations run into the same challenge as any other large-scale job. The sheer extent of the land in which mining operations take over makes keeping tabs on them difficult from the ground. A more efficient and practical alternative is to shift to aerial inspection via drones.

Drones can be useful in just about all stages of a mining inspection. Aerial mapping via drones can help in the planning phase, allowing project managers to forecast how much excavation will be needed on the site and the length of roads to be constructed. During the excavation and actual operations, drones can be used to keep track of when materials need to be hauled out or to detect the presence of geological hazards in the site.

In this regard, drone inspection isn’t just used as a tool for productivity monitoring – it’s also critical in project execution and personnel safety. The great thing about drones is that they are so inexpensive in the context of the total cost of mining operations that a company can have a drone flying overhead at practically every moment.

Inspection of farms is one of the more surprising applications of drones, but it’s becoming incredibly common nowadays. Just as with large-scale mining and solar farms, agricultural farms are difficult to inspect on account of the sheer extent of the area involved. 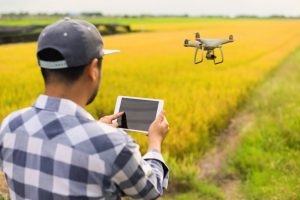 Aside from the speed with which drones can cover these large areas, drones can also be equipped with special equipment called multispectral sensors. This is basically a camera that is sensitive to electromagnetic energy that is no longer visible to the human eye.

The data captured by a multispectral survey over a farm can be processed to determine if there are areas in the farms with crops that are not thriving. This data can then be used by the farm owner to allocate which areas of the farm need more irrigation or fertilization.

This “smart” approach to farming has not quite been adopted by developing countries yet, but certainly still has plenty of untapped potential. With a chance to contribute to solving the global food shortage problem, this may be one of the more noble applications of drone technology.

Just like power lines and solar farms, water systems such as dams and aqueducts are considered critical infrastructure. They can serve as water reservoirs, sources of hydroelectric power, or as a catch basin in case of heavy rains. Needless to say, regular inspection of these water systems has to be done to ensure their overall integrity.

Using drones to inspect water systems for any damage is a matter of efficiency and safety. With drones, inspection personnel no longer need to work at great heights while also being able to finish an inspection job faster. Infrared cameras mounted on cameras can provide a quick and convenient way to detect thermal anomalies on dams, which could be indicative of leaks.

Aside from regular inspection for signs of damage, drones can also be used for overall surveillance of water systems to discourage intruders and to keep tabs on vegetation growth. Even when doing large-scale construction projects or parts replacement in these water systems, drones can be a useful tool for comprehensive documentation.

With their freedom of movement and ease of deployment, drones are quickly earning a reputation as excellent inspection tools. They can even see data that are not visible to the naked eye through the use of custom payload equipment such as thermal cameras and multispectral sensors.

The applications we have listed here are only a preview of all the possible professional uses of drones. Inspection jobs are usually lucrative jobs for drone pilots because of how technically demanding they are and the fact that they often involve flying near critical infrastructure. The flipside of this is that they are also only offered to more experienced drone pilots. 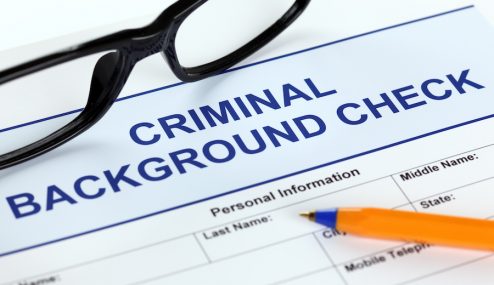 What the TSA Checks During A Part 107 Application

The DJI FPV Drone – How Good is the First Racing Drone from DJI? 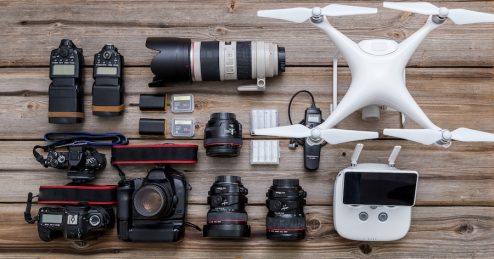 Drone Pilot Gear – What Equipment You Should Get