Just before the year 2019 ended, the FAA released the notice of proposed rulemaking (NPRM) for the long-anticipated remote ID system for unmanned aircraft systems (UAS). The FAA had announced plans for a remote ID more than a year ago, so it wasn’t much of a surprise when the drone community reacted with vigor at the released proposal. Commercial drone pilots expectedly have more interest in the proposal, as the remote ID system has been perceived as the solution to overcoming numerous restrictions to drone flight such as flying over people or beyond visual line of sight.

The proposal was published in the Federal Register on December 31, 2019, giving the general public a 60-day period to submit their comments. The problem is that the document is 319 pages long and we can’t imagine a lot of people poring over all the details of the proposal. In an effort to let the proposed rules reach out to a wider audience, we have summarized the most important points of the NPRM and answered some of the most frequently asked questions.

1. What is the Remote ID, and what is its purpose?

The Remote ID is a system by which a UAS can be identified by the FAA, law enforcement, or the general public through the information that the UAS continuously transmits, akin to an “electronic license plate.”

There are several reasons why the FAA is proposing the Remote ID system. The primary reason, of course, is to help keep the national airspace safe through accountability and traffic management. Through the Remote ID, the FAA or law enforcement can quickly and easily identify the number of UAS flying over any particular area and identify these UAS.

2. What drones will be under the scope of the Remote ID?

The Remote ID will apply to all UAS that fall under the previous registration rules of the FAA. More specifically, all drones that weigh 0.55 pounds or above will need to abide by the Remote ID requirements.

3. When will these new rules start implementation?

There is no concrete date on when the Remote ID requirements will take effect, as the FAA will likely spend some time reviewing the comments that they receive during this 60-day period. After the FAA has reviewed or revised the proposal as necessary, they will publish a final ruling, which will then take effect after 60 days. How long will this process take? Implementation probably would not happen within 9 to 12 months, but it’s anyone’s guess at this point.

After 2 years of implementation, all drones sold in the US will need to comply with Remote ID requirements. After 3 years, Remote ID rules will apply to all drones regardless of when they were purchased.

4. What information will my UAS transmit with the Remote ID?

The FAA will standardize the information that a UAS with Remote ID will publish, regardless of the type of Remote ID in employ (more on that later). The information “packet” includes:

5. Where does the information transmitted by the UAS go?

To answer this question, we must first define the two types of Remote ID: a “standard Remote ID” and a “limited Remote ID.” These Remote ID types differ not just in the extent of the reach of your transmitted data but also determines where you will be allowed to fly your UAS.

A standard Remote ID transmits your Remote ID data both to the USS, to a radio frequency channel, and via the Internet. This means that anyone (i.e. the general public) within the radiofrequency range of your UAS or with Internet access will be able to see the data. A standard Remote ID will allow you to fly beyond visual line-of-sight but ONLY if you have secured the necessary waiver from the FAA.

6. The term “Session ID” seems new. What does it mean?

The NPRM states that a Session ID is a randomly generated alphanumeric code that the USS generates for the UAS pilot. This Session ID is valid only for one flight and will be used to identify the UAS instead of its serial number. This will be done in the interest of safety and security, especially for UAS pilots who have to conduct repeat or regular operations.

7. Will all of the Remote ID information be available to the public?

From the wording of the NPRM, it does seem that all the information transmitted via the Remote ID will be accessible to the general public. This includes the location and altitude of the control station for both limited and standard Remote ID and the location and altitude of the UAS for the standard Remote ID. This provision has already been met with concerns over the safety of UAS operators and we will surely address it in our response.

8. How will my drone get Remote ID capabilities?

Virtually all ready-to-fly drones can transmit data via radiofrequency, so that should no longer be a problem (standard Remote ID only) However, transmitting data via the Internet will require you to get a data plan, as you will be required to transmit the Remote ID data in real-time. While it may be possible to transmit data via Wi-Fi, the reality is that most flight spots are out in the middle of nowhere and have no Wi-Fi access.

You will also need to subscribe to the Remote ID USS, which the FAA estimates will cost around $2.50 per month. We can assume that transmitting your UAS data via the Internet will require a data plan on your mobile phone or even the UAS, which will likely be paired to your remote controller. There’s no word yet on how much data and how often this data will be transmitted, so we can’t really comment on the data cap you’ll be needing to abide by Remote ID requirements.

9. How much will this cost?

It’s hard to say at this point. You will, at least, need to pay a monthly subscription fee for the services of the USS and have a data plan active while you fly. There’s also the fact that drone manufacturers have to design their drones with the technology for Remote ID. Between the research and development that will go towards this effort, plus the software and hardware needed for implementation, this will almost certainly lead to drones that are a bit more expensive than they used to be.

10. How will I know if the drone I buy has Remote ID capabilities?

When Remote ID takes effect, drone manufacturers will design their drones to have pre-installed Remote ID capabilities. These drones will come with a “Declaration of Compliance” that states in clear terms whether they have either standard Remote ID or limited Remote ID. Moreover, the FAA will maintain a list of drones that have been confirmed to have standard or limited Remote ID features.

11. What if my drone doesn’t have Remote ID capabilities?

If your drone does not support Remote ID, then the FAA says that you are limited to flying only in an FAA-recognized identification area (FRIA). There is no word yet on where and how big these FRIA’s are, but the FAA provides an option for local flying clubs and community-based organizations to propose FRIA’s for their flying fields. These requests are subject to FAA approval.

12. How far away can I fly my UAS with a limited Remote ID?

13. What if I’m flying in a spot with poor network connectivity?

The FAA states that the UAS should transmit Remote ID through the Internet when available. The “when available” qualifier is certainly ambiguous in this context, and not defined. Internet connectivity requirements will vary depending on the type of Remote ID system your drone is equipped with.

For drones equipped with limited Remote ID, the Internet connection is required at all times, before takeoff and during flight. If the internet becomes unavailable after takeoff, the operator will have to land as soon as practical.

For drones equipped with standard Remote ID, there are several scenarios. If the internet is available before takeoff, the UAS must connect to a USS. If the connection cannot be made with a USS (because the internet cannot transmit data or if the USS service is down), the aircraft will be grounded. If the internet is unavailable before takeoff, the UAS can fly using the broadcast system. If, during flight,  the broadcast functionality becomes unavailable (and the USS connection is not available), the operator must land as soon as practical.

15. Does this mean that recreational drone pilots need to register each one of their UAS separately?

Yes, it does. The existing FAA registration rules allow for the registration of multiple UAS under a single serial number if they will only be used recreationally. This will no longer be the case once Remote ID is in effect. Each UAS will have to be assigned a serial number, and UAS owners may need to pay the $5 registration fee multiple times.

16. What are the chances of the FAA making massive changes to the NPRM before the final issue?

We can’t say exactly how “massive” any changes will be, but it’s safe to presume that the FAA is open to suggestions and criticism of the NPRM. Much like the process of coming up with the rules of Part 107, the Remote ID NPRM is open to discussion and debate.

If you have any concerns with the NPRM, then it’s very important to make your voice heard. With stakeholders and the general public expressing some very strong reactions to the NPRM, we can look forward to a version of the Remote ID rules that is agreeable to a greater number of people.

There are four ways for you to send your comments to the Remote ID NPRM:

You have until March 2, 2020 to send your comments. Take note that you are not limited to how long your comments will be, but we suggest organizing your ideas and backing them up with concrete evidence. If there are parts of the NPRM that you do not agree with, then it’s best to suggest viable alternatives. Most importantly – remain polite and respectful.

The release of the NPRM for Remote ID is a huge event for the FAA, the commercial drone industry, and the drone community as a whole. Predictably, the proposed rules have ruffled a lot of feathers and many have already expressed concerns over the safety of UAS operators and the added financial burden that the rules put on commercial drone pilots. We can also expect strong reactions from the recreational UAS community, as the Remote ID will enforce much stricter rules on them moving forward.

We will be releasing additional talking points that will be in our response. We do not recommend copy/pasting someone’s comment as it will only be considered as one comment. We will provide you with sources you can quote and ideas so you too can craft a thoughtful response.

We encourage all drone pilots to give the NPRM a quick scan, especially if there are provisions that you don’t agree with. Take note that the Remote ID will likely affect all drone pilots unless you restrict yourself to flying drones that weigh less than 0.55 pounds and for recreational purposes only. This is the time for the voice of the drone community to be heard, and it would be great if you could contribute yours to the cause. 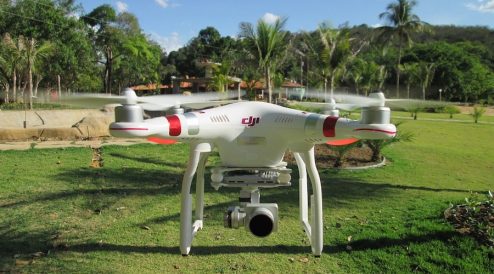