Communication in aviation is important, but what do you do if the radio fails? Fortunately, there is an alternative. Light gun signals can be used to relay vital information. But what are they, and what do they mean? Today we will explain everything you need to know about light signals from the tower and even provide you with a handy guide!

What Are Light Gun Signals?

Light gun signals are used by ATC to give information to aircraft that are not contactable by radio. There are 3 different colors of lights; red, green and white. These signals can either be steady or flashing and have different meanings for aircraft in the air and on the ground.

The good news is that there aren’t that many light gun signals that you need to remember. There are only 10 possible messages that can be relayed to a pilot with light signals from the tower.

You can gain vital information if you know them, especially if you are flying non-radio.

What Colors Can a Light Gun Emit?

Light guns can emit only one of three colors.

As the information must be simple and unambiguous, the colors are all in contrast with each other and are easily identifiable.

They are as follows: –

Yes, indeed, you are right!

There are 10 different light gun signals that you’ll need to remember. There are 3 colors, but 10 different potential messages come because the light signals from the tower can either be steady or flashing.

However, here at Pilot Institute, we like to make things easy, so you’ll find a handy ‘cheat sheet’ below detailing all of the possible light gun signals in a handy and organized table, along with a detailed guide to light gun signals and possible scenarios when you should look out for them.

Where Do I Look for Light Gun Signals?

The first is by using a directional lamp, shone straight out of the tower window toward the aircraft.

Some larger airfields will utilize a light beacon located on top of the air traffic control tower. This beacon is non-directional but can still ‘transmit’ different colors to aircraft in the air and on the ground.

Why Do I Need to Know Light Gun Signals?

Two possible scenarios would mean you need to know about light gun signals from the tower. Let’s take a quick look at each: –

You Don’t Have a Radio in Your Aircraft

While it is rare, some aircraft simply don’t have radios installed. As a general rule, to fly in certain types of controlled airspace, you will need an onboard radio. However, it is perfectly feasible to fly outside of controlled airspace without having to actually speak to anyone. Interestingly, unless you intend to fly internationally, it is not required to hold a valid FCC radio operator’s license within the USA.

Certain airfields will still need to relay key information to the pilot. Therefore you will need to know and remember all light gun signals.

The Tower or the Aircraft has Suffered a Radio Failure

While it is exceptionally rare, two-way radio communication failure does happen from time to time. This can either be the aircraft radio that fails or (very rarely) the tower radio.

Fortunately, the FAA has detailed procedures for when radios fail and what you must do as a pilot.

Do Light Gun Signals Only Apply to Aircraft?

Actually, no. The tower may also use light gun signals to pass information to vehicles or personnel operating at the airport. Fortunately, most of these signals have a common meaning for both ground vehicles and aircraft on the ground.

You’ll find detailed information about what these light signals mean below.

Ok, let’s jump right in. Here is a detailed explanation of light gun signals for aircraft. You’ll find all of the information summarized in a table at the end of this guide.

A steady green light directed to aircraft in flight means that the aircraft is cleared to land. This means that the pilot can reasonably expect the runway to be clear without the risk of coming into conflict with another aircraft.

A steady green light directed to the aircraft on the ground means that the aircraft is cleared to take off. The airplane is permitted to enter the runway and depart.

When communicating with the radio, clearance doesn’t automatically mean that the runway is safe to use. It is vital that, in addition to receiving your clearance from the tower, you still check that the runway or the approach is clear of traffic.

The flashing green light gun signal means “return for landing”. This signal will normally be given to an aircraft when it is in the circuit.

If you have received a flashing green light from the tower, it pays to keep a close eye for subsequent light gun signals, as you can expect to be given a steady green light in due course.

The flashing green light will be directed at aircraft on the ground to signal that they are cleared to taxi. This could be either to the takeoff runway or away from the runway back to their stand.

The likelihood of a collision is highest when the aircraft is on the ground. If the tower uses light gun signals, it probably means that you are not in radio contact. Therefore, you must keep a good lookout for other aircraft while maneuvering.

Again, you will most likely see this signal when in the circuit and flying close to the airport. A steady red light means that you must give way to other aircraft and continue circling.

If you observe this signal, there is a high probability of other aircraft using the runway. Keep a good lookout so as not to miss your cue for you to begin your approach (flashing green).

A steady red light directed at aircraft on the ground has an easy-to-remember meaning.

This signal is often used to direct aircraft approaching runway holding points. However, it could also be used to ask an aircraft to abort the takeoff.

Red is a distinctive color that normally means ‘danger’. Keep this in mind whenever you see a red signal.

When on the ground, the controller will have asked you to stop for a reason. Normally this means other traffic, so it pays to have your wits about you and maintain good situational awareness.

If you receive a red light gun signal in the air, this, in all likelihood, means that there is other traffic around. Ensure that you keep a good lookout to avoid coming into proximity with another aircraft.

A flashing red signal is definitely one to watch out for. It is safety-related. It means that the airport is, at present, unsafe, and an approach to landing should not be made. A flashing red is a real attention-getter. Remember that flashing red indicates danger, and you won’t go far wrong.

A flashing red light gun signal isn’t quite as critical as when you are in the air. On the ground, it means that you must vacate the runway in use. You can expect to see this one just after you have completed your landing.

While you may have successfully landed, it is vital to note that the flight is not over. You must still keep a good eye on the tower for light gun signals.

There may be more than one runway in use, and you could be required to cross an active runway during your taxi. What would you do if you saw a red light from the tower while taxiing?

You should not see a flashing white light in the air. According to the FAA, this light gun signal is unassigned.

A flashing white light sent to aircraft on the ground means that the airplane must return to its starting point at the airport. This could be back to a parking stand or the runway holding point if you’ve made a full stop after completing a circuit.

Again, this signal will mean that you will be spending a lot of time maneuvering on the ground. Ensure that you keep a good lookout for conflicting traffic and know which runways are in use while taxiing.

Red and green alternating is another one to watch out for. This light signal simply means ‘exercise extreme caution’!

There are numerous reasons why this could occur, including: –

When seeing green and red together, the take-home message is that there is something unusual going on, so ensure that you give all considerations your full attention.

This light signal is unique as it is the only one that means exactly the same in the air as it does on the ground… “Exercise extreme caution”!

Alternating red and green light gun signals are a little unique. Unlike all of the other light gun signals, which are instructions (and often clearances), this signal is simply a warning. Unfortunately, it will be up to you to work out exactly why the tower has issued this advice of exercising caution.

If you see it, it pays to consider why it has been issued and act accordingly.

How Do I Acknowledge Light Gun Signals?

Thinking about it, good communication is a two-way thing. How will the tower know that you have received and understood their message?

Well, the FAA recommends the following technique as given in the Aeronautical Information Manual (AIM chapter 4-2-13 A.2): –

Interpreting light gun signals is, on the face of it, easy. After all, limited information can be passed with only three light colors. However, the information contained within is vitally important. Like with a radio message, light gun signals are air traffic control clearances and must be followed. Fortunately, you’ll be extremely clued up with our easy-to-remember guide.

If you enjoyed this guide, why not check out our online flying courses. There are tips, tricks, and detailed resources to ensure you get the most out of your flight training. You can see all of our courses here.

How Hard Is It to Become a Pilot? 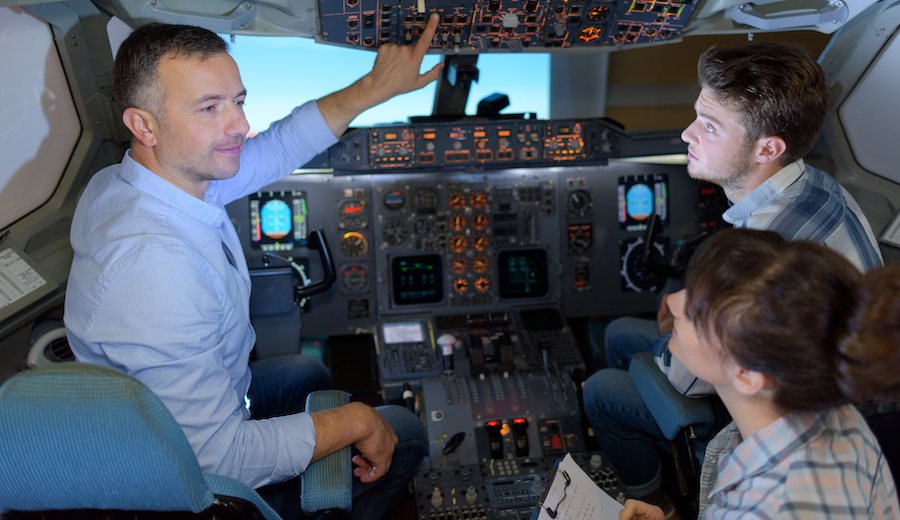 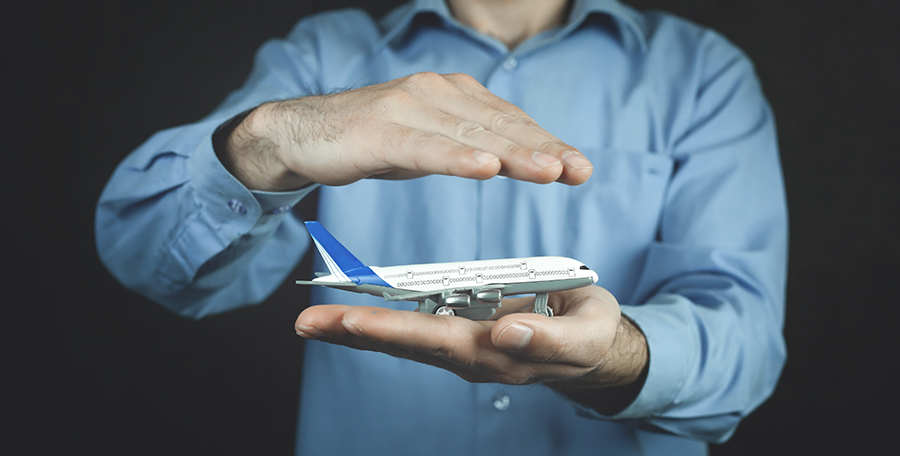 The Real Cost of Aircraft Insurance