Both recreational and commercial operators can fly near an airport, but only upon being granted authorization by the FAA through either the LAANC system or the FAA DroneZone website. Even with an authorization, drone pilots need to fly only within pre-defined restrictions.

To be clear, what is the FAA ruling about flying near an airport? What is the proper way to secure authorization should you absolutely need to fly in controlled airspace?

An intro to controlled airspace

Controlled airspace refers to the three-dimensional space where air traffic control (ATC) services are provided. This typically occurs near airports, and the size and shape of the controlled airspace will depend on the volume of air traffic that the airport receives and the orientation of the airport’s runway and facilities. Active ATC may not always be available in all airports – this also depends on the volume of air traffic.

Regardless of the availability of ATC services at the exact time of flight, any type of drone flight within controlled airspace is restricted by default without approval. This is a measure imposed by the FAA to avoid any encounters between drones and manned aircraft. Despite the rules, however, there have been a lot of sightings of drones near airports, providing an impetus for even stricter drone flight restrictions.

How to know if you’re flying in controlled airspace

Determining whether or not you are within controlled airspace is your responsibility as a drone pilot. Fortunately, it’s become very easy to do this nowadays. There is now a wealth of mobile apps that will show you the location and extent of the controlled airspace in each airport and the prevailing restrictions. One of the most frequently recommended apps is B4UFLY (available for both Android and iTunes), but there are more than a dozen others out there.

Every airport in the country that is located within controlled airspace follows a Facility Map, also called a “grid”. These “grids” inform pilots of which altitude they can request to fly up to. They vary between 0 feet (no flying allowed) to 400 feet, in increments of 50 feet. You can see an example of a Facility Map Grid below. 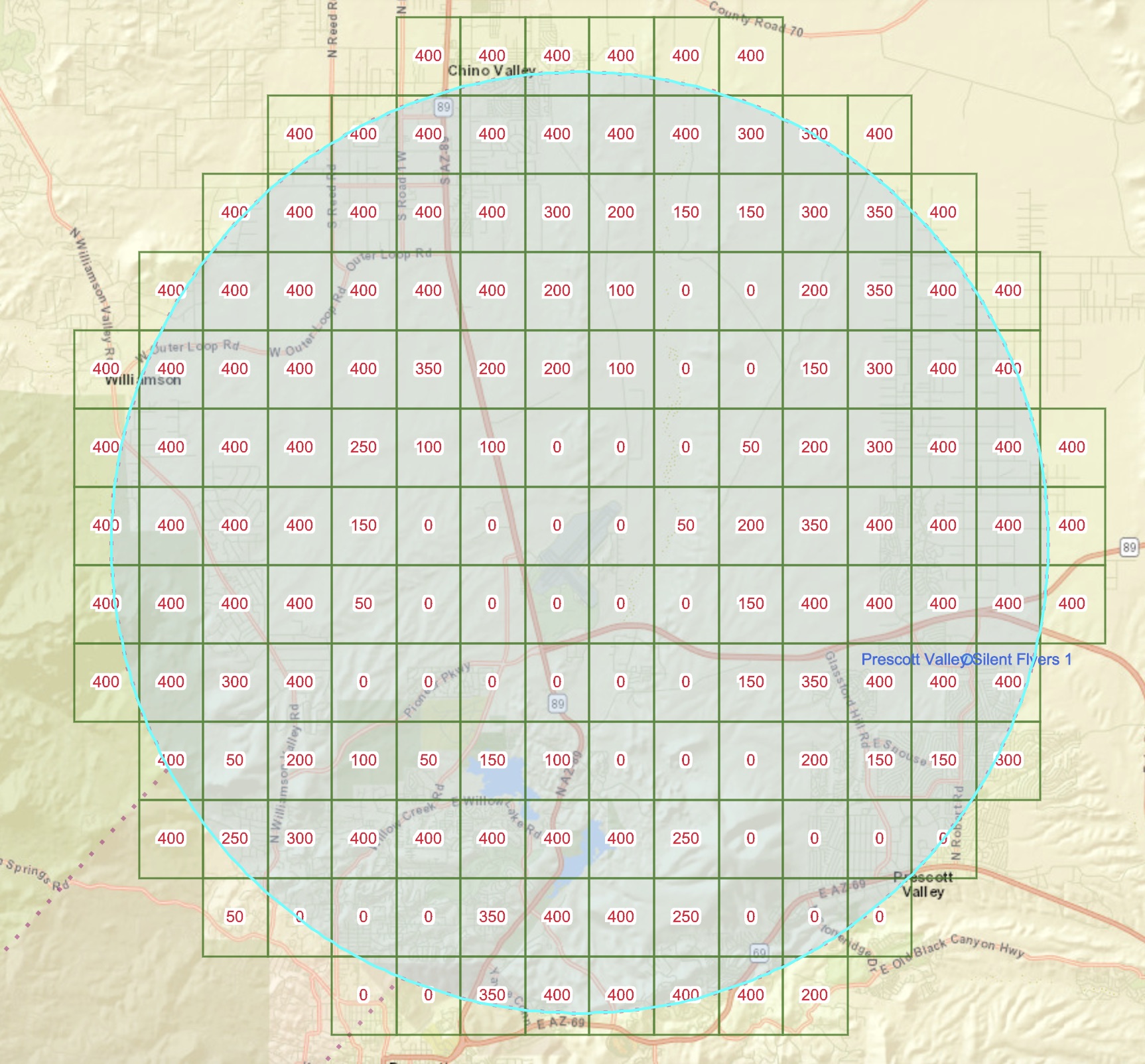 Example of the UAS Facility Map Grid at KPRC

Facility maps for all the airports in the country can be found on the FAA UAS Facility Map website or by using one of the apps mentioned above such as B4UFLY.

In 2017, the FAA released the Low Altitude Authorization and Notification Capability (LAANC). This system allows drone pilots to request for approval to fly in controlled airspace and receive a response almost instantaneously. It was developed by the FAA with the input of various stakeholders, such as drone flight groups, manufacturers, and operators.

Before LAANC was in place, Part 107 drone pilots had to file an airspace authorization request via the FAA DroneZone portal. The process was similar to requesting a waiver in that it was very tedious and took several weeks/months before a request could be granted. Obviously, the system was very inflexible for commercial drone operators who had to plan weeks in advance to do paid drone jobs near airports.

Back then, the only alternative was to personally call up the nearby airport or ATC facility and request for authorization. Approval was typically only granted verbally. This was not very “systematic,” and airports ended up fielding a lot of requests from nearby drone pilots. This proved to be added work for airport and ATC personnel who very likely have more important things to attend to. It is no longer allowed to call ATC to get approval.

Through the LAANC system, requests for flight in controlled airspace are approved automatically by the FAA. This allows for a faster approval process and eased the strain on the ATC.

Another advantage of a centralized system is that it allows the FAA to grant requests in the context of more time-sensitive or temporary restrictions, such as temporary flight restrictions (TFR) or Notice to Airmen (NOTAM). Drone pilots may be unaware of these restrictions if they have been flying in the same place regularly.

Which apps can be used to apply for LAANC authorization?

LAANC was developed in collaboration with a few drone software companies, and companies were the first to receive the LAANC feature. It was also first developed with Part 107-licensed pilots in mind, although the capability has since expanded to include recreational drone pilots.

Part 107 pilots can request for real-time authorization through any of these channels. We recommend you try Kittyhawk. They also have the option of requesting for “further coordination” if pilots want to fly above the altitude ceiling of any controlled airspace. Request for further coordination, however, may take up to 90 days before being granted.

After submitting a request, you should receive a response in just a few minutes. The response will be in the form of a text message that states the condition of the approval, including the allowable maximum altitude and the area where you are allowed to fly. Even after approval, drone pilots need to keep the lines of communication should the FAA need to get in touch for any reason.

Can I use the LAANC system to request advanced approval?

The near-instant response of the LAANC system is touted as its best feature, but you do not need to request for authorization only when you are on site. It also allows drone pilots to specify a time and date for their planned missions and get prior approval. Obviously, conditions may change if your planned flight is still a few weeks away. However, this is a nifty feature for commercial drone pilots who want to prepare ahead of doing a paid drone job.

Do all airports support approval via LAANC?

LAANC is still going through expansions to its capability. As such, high-traffic airports were prioritized to be onboard with the LAANC system. Right now, approval to fly drones can be secured for more than 600 airports. The FAA maintains the list here and continues to update it as more airports are added.

If you need to fly a drone that’s not one the list, your only recourse would be to apply for airspace authorization through the FAA DroneZone website. As we’ve already touched on, approval for such a request can take several weeks to be granted. If you have a planned drone flight near an airport, the first thing to check would be if the nearby airport is included in the LAANC list.

How about recreational drone pilots?

Right now, LAANC support for recreational drone pilots is only provided by Airmap, AltitudeAngel, KittyHawk, Thales Group, and UASidekick. As with LAANC for Part 107, we can expect this list to grow longer as the FAA grants approval to more companies.

Take note that recreational drone pilots are also required to register their drones if they weigh at least 0.55 pounds. Depending on the software you use, you may or may not be required to provide the serial number of your drone. You will also need to follow the drone flight rules for recreation pilots, as outlined by the FAA Reauthorization Act of 2018.

How to request authorization through LAANC

The specific steps and commands to follow in requesting for LAANC authorization may vary from one software to another, but the essence of each step should be similar. In any case, open the software on your computer or the mobile app equivalent in your phone, making sure that you have a data connection and that your GPS is active.

1. Provide the location of your drone flight

2. Check for flight restrictions in your chosen location

3. Specify if you are flying under Part 107 or recreational rules

You will need to choose whether you are flying as a Part 107-licensed drone pilot or as a recreational drone pilot. This may play a role in the conditions of the approval that will be granted to you.

4. Define the extent of your planned drone flight

You will then have to set the specific area in which you plan to fly your drone. How this is implemented may vary between different software. As an example, Airhawk gives you the option of setting it using an ellipsoid tool, a box tool, or a freeform drawing tool. Other software may have you choose sections of a pre-defined grid. In any case, you need to specify a closed area within which you are voluntarily limiting the extent of your planned drone flight mission.

Once you have set an area, you need to provide the time, date, and duration for which you plan to fly a drone. You can also choose to fly ‘right now,’ although you’ll still need to specify a duration.

You then have to provide your name, contact details, the make and model of your drone, and its registration number. Make sure that the FAA can get in touch with you through the phone number that you are providing. The text message for approval will also be sent through the same phone number.

7. Go through a pre-flight checklist

You will be presented with a series of basic yes or no questions, which mostly pertain to doing a pre-flight inspection of your drone. If you don’t know how to check if your drone is fit to fly, the items in this checklist would be a good guide to get you started.

Before closing your application, some apps may give you a brief weather forecast for the time and date that you have provided. The details should include wind speed, temperature, visibility, and precipitation. This is a good chance to check if it will be a good time to fly before you officially submit your request.

9. Review the details of your application

Before clicking the ‘submit’ button, you will be shown a summary of the details you have provided. This is your last chance to go over it and check for any errors.

It should take just a few seconds or minutes for you to receive approval for your request. The approval will come through an SMS message that contains a confirmation number and the flight conditions under which you are allowed to fly. Most apps also provide the option of downloading a PDF file of the authorization document, which you may keep for your file or have printed.

Can I fly higher than the max LAANC altitude?

In certain cases, it is possible for Remote Pilot to request flights above the “grid” LAANC maximum altitude, including grids where the altitude is 0 feet. It is currently not possible for hobbyists to request these types of flights.

You can follow the steps in this video to request those flights.

With the LAANC system, the FAA has made it easier than ever for drone pilots to get approval to fly in the controlled airspace near airports. Instead of the weeks it used to take, approval can now be granted in a matter of minutes. This has been one of the more welcome changes among the drone flight community.

Take note that the usual flight rules apply even if you get LAANC authorization, especially the rule for always giving way to manned aircraft. You also need to pay attention to the altitude ceiling for each type of controlled airspace.

Can a Non-US Citizen Get A Part 107 Drone License?