From Hobbyist to Market Leader: How Mark Taylor Scaled his Drone Business 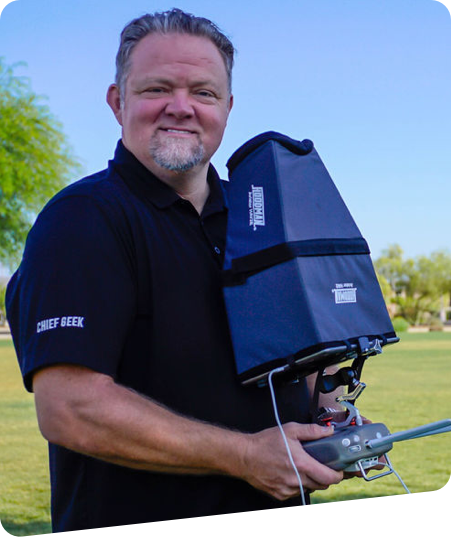 Drones are usually the news for the wrong reason. We want to showcase responsible users. What’s your story? Share it on social media using the hatshag #dronesforgood and let’s change the narrative on drones.

Mark Taylor started his drone services company, Extreme Aerial Productions, in 2014 when it was still the wild west. He started his company before the Section 333 exemption was even finalized and several years before the Part 107 standards were released.

Mark has a long history in aviation. He was part of the Royal Air Force in the United Kingdom for a few years before emigrating to the United States for business reasons. He moved to Phoenix, Arizona where he worked with hot air balloons. He’d wake up at 4 am for sunrise hot air balloon flights in the desert and finish up by about 7 am in time for the tourists to get routed to the Grand Canyon. He has 175 hours of flight time with hot air balloons.

Getting Started with Drones

Mark has always had a penchant for technology so he was interested in drones when they first started appearing for hobbyists. Realtors approached Mark looking to use drone videos to market their listings. During his first flight, a neighbor complained and the FAA asked Mark to get his Private Pilot license so that he could fly his drone for commercial reasons. He has 76 hours of flight time in manned airplanes.

With about 10 minutes of drone experience, Mark purchased a Phantom 3 drone from Amazon and on his first flight the drone malfunctioned and fell out of the sky from 1200 feet in the air. He returned the defective drone to Amazon and used the new drone to shoot commercial videos for clients.

During one of his early listings, the realtor he was working with was doing a bit of pre-marketing and wanted Mark to use his drone for footage to help secure the listing. This is against the rules and Mark didn’t know that this was happening. The homeowner came out of his house and was initially quite upset but quickly warmed up to the idea. He wanted Mark to shoot footage of him driving his carbon-fiber Audi. Mark agreed and uploaded the video to YouTube.

A few days later, he received a call from someone in New York City who wanted him to sign a Non-Disclosure Agreement to work with a large brand. The company ended up being Audi and Mark made five figures over 8 days during the shoot. The shoot lead to 6 seconds of footage in an ad and resulted in Mark getting a ton of work for TV shows.

Mark and his team have strict policies in place to ensure that every flight is safe and authorized. As part of the process, he takes screenshots of his altitudes during flights for documentation.

Getting customers and clients is easy, keeping them isn’t. Mark suggests that you set clear rules and expectations upfront. If they don’t want to follow them, he says that you should walk away – it’s not worth the risks.

You’re only as good as your last deal.

Mark follows the principle that you are only as good as your last deal. By this, he means that you should always be seeking to improve and provide the best experience to every client. This will force you to put your customers first.

Mark says that it’s not enough to just be able to fly a drone.  You need to constantly up your game and know how to operate the camera to get cinematic shots. Editing, mapping, and other skills are also important. He says that you can’t be a one-trick pony in the drone space. He has $300,000 in equipment and 9 staff to offer wide-ranging services.

In the drone space, you sometimes compete with amateurs who are willing to break the FAA rules. Mark strongly advises against this because of the liability this can create and because the FAA has the power to fine you big amounts. It’s your job to educate the client on the risks and let them know about the regulations that need to be followed.

Mark recommends having at least 2 of everything during shoots because things can often go wrong. He also recommends that you educate your clients on what drone you should use and the quality you should export the footage at depending on their actual requirements and budget.

You’re unemployed every day you wake up.

As an entrepreneur, you always need to be on the hunt for the next deal. Mark enjoys the chase that securing clients offers. He shows up at construction sites to talk to the managers to secure mapping clients.

Mark recommends treating your drone business like a real business. You should take it seriously and be professional.

See All
An Expert’s View of the Remote ID NPRM: An Interview with Kenji Sugihara
Read the story