A drone crash is a pivotal moment for any drone pilot. It inevitably happens and serves as one of the best lessons that one could have about drone flight. Knowing your limits and recognizing that there is still much to learn are realizations that only become apparent once you have crashed your drone.

Another lesson that a drone crash will teach is accountability. Once a drone crashes, you are accountable for any injury or damage it could cause. A major responsibility of a drone pilot is to try and retrieve the crashed drone. Why is this necessary?

To make this discussion more interesting, let’s start by thinking of the worst-case scenario that could happen if you crash a drone and do not retrieve it. Keep in mind that a drone carries batteries. If these batteries suffer mechanical damage during the crash, they could easily overheat and catch fire. If this happens in the forest, then a simple drone crash can start a wildfire.

The more sobering thing about this scenario is that it has already happened. In 2018, a wildfire near Kendrick Park in northern Arizona was traced to a drone that caught fire near some grass. More than 200 acres of forest was burned down due to the wildfire

There was no further news on who owned the drone, what type of drone started the fire, or whether it crashed at all. However, this event serves as ample warning for the damage that can be potentially caused by drones. Modern drones may have smaller and less dangerous batteries but let’s keep in mind that wildfires can be very easy to start particularly in hot and dry seasons.

Wildfires may be the most damaging potential consequence of a drone crash, but it’s not the only one. A damaged battery can start leaking corrosive fluids that can then pollute the soil or cause harm to wildlife and vegetation.

Not retrieving a crashed drone also violates the LEAVE NO TRACE principle, especially if it happens in a park or forest. Drones are made of metal and plastic and will likely take several decades to fully decompose in a natural setting. During this time, the presence of trash will negatively affect all nearby plants and animals.

Retrieving a crashed drone may not always be possible

Understandably, there may be times when retrieving a crashed drone is no longer possible. A drone may fall into the ocean, into a ravine, or into a thickly vegetated forest. Retrieving a drone is not worth putting your welfare at risk. You will also want to avoid venturing into any place where you might get lost. 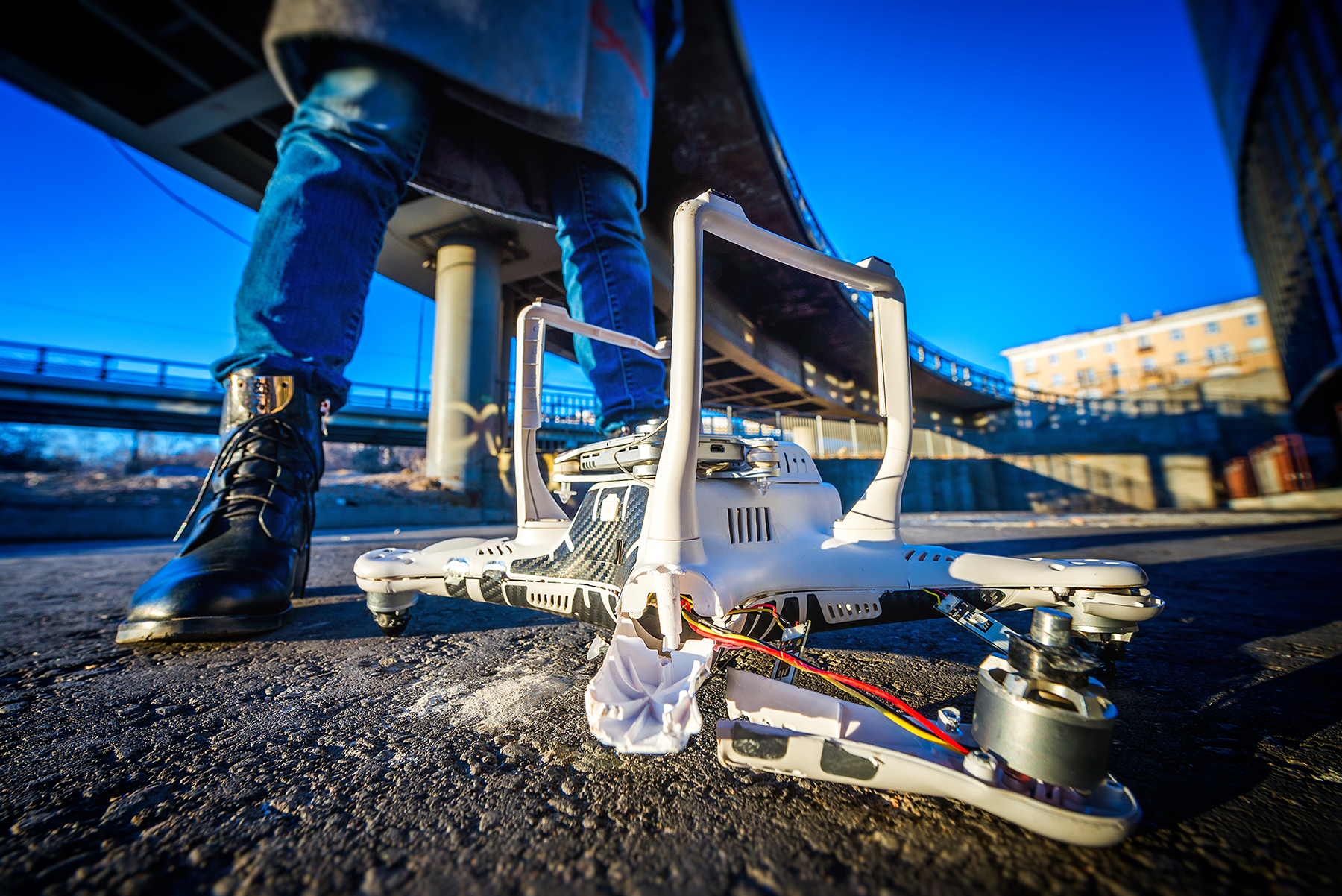 Daylight is an important tool in helping you find a crashed drone. If it’s getting late, you can consider postponing your search for the next day for the sake of your safety. It’s recommended to exhaust all possible means to retrieve your crashed drone, even if you need to enlist additional help. However, there are simply cases when retrieval is no longer possible.

Could you be legally liable for not retrieving a crashed drone?

Are you going to have any legal issues should you be unable to retrieve your drone? That depends on several factors, but any damage or injury caused by a drone crash will very likely be your liability. Even more problematic would be if your drone crashed in an area where you are NOT supposed to be flying a drone.

For those flying under Part 107 rules, you are legally required to file a report to the FAA and NTSB if the drone crashed caused serious personal injury or at least $500 worth of property damage. This report must be provided no more than 10 days after the incident.

According to a recent Advisory Circular (AC 91.57C), recreational drone pilots might also be required to file drone crash reports subject to guidelines established by Community-Based Organizations (CBOs). The rules here are not as rigid as CBOs can come up with different guidelines. This new AC is still under draft status and is still subject to comments and revision before they can be fully implemented.

Learning from a drone crash

Some people have described learning to fly a drone as “learning by crashing.” Indeed, every single drone pilot has crashed a drone, likely several times at the time when they were still learning. Even experienced drone pilots who have been flying for years can get into crashes, likely because of factors that they have not encountered before. 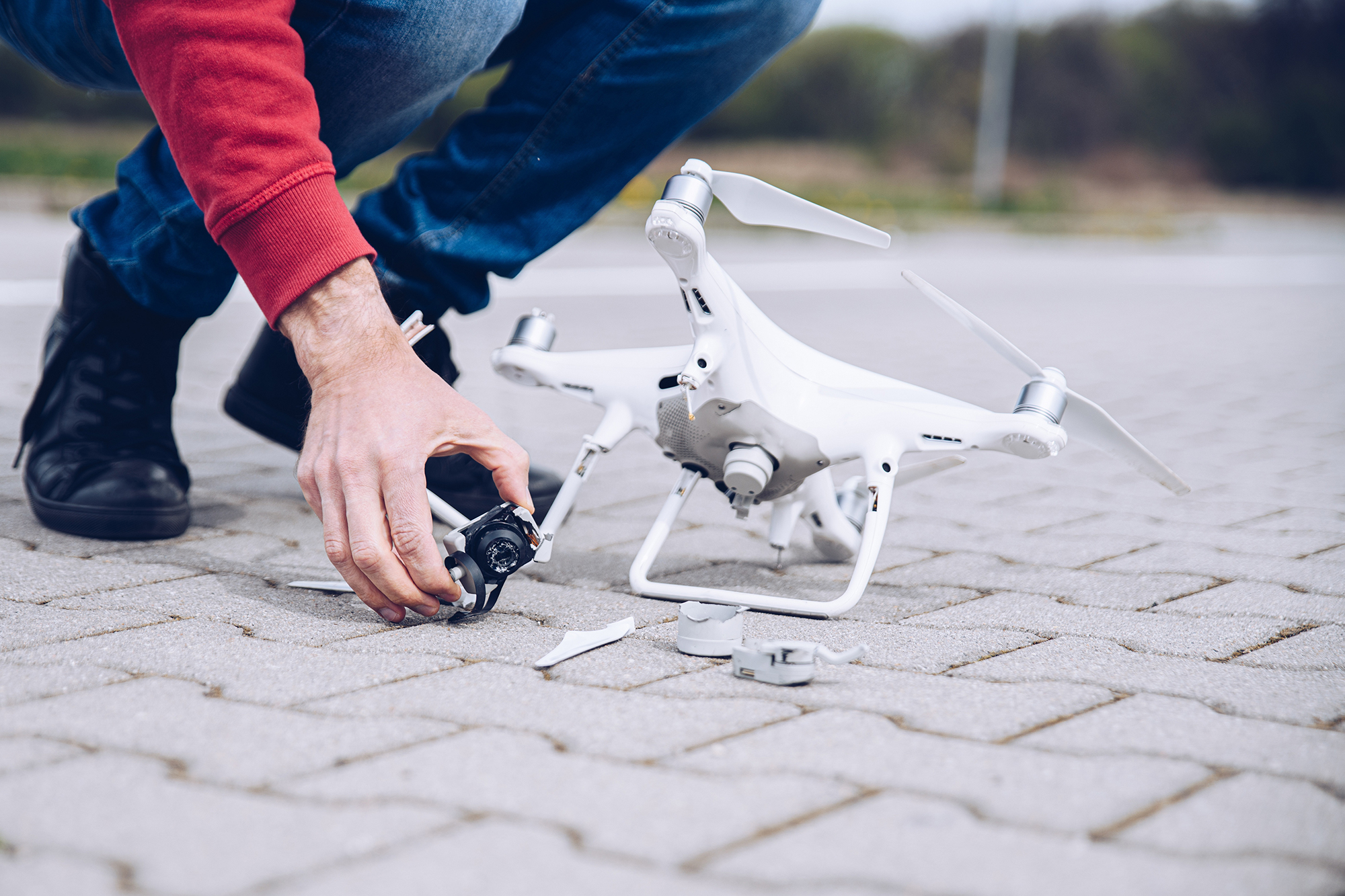 Every failure is a learning opportunity. If you crashed your drone, it’s worth the time and effort to go through the flight’s video capture and telemetry data to figure out exactly what went wrong. This is, of course, best done after you have gotten over the emotional turmoil of crashing a drone and potentially having to spend a few hundred dollars on repair.

Crashes are such an effective learning tool that you can even learn from the crashes of other drone pilots. There are tons of videos out there of people crashing their drones, and each one has a cautionary tale to tell.

Our point here is to not be discouraged by a drone crash. Dwell on it just enough to learn your lesson and get back on the air as soon as you’re feeling confident again. Drone crashes happen not just to the best drone pilots, but possibly to ALL drone pilots.

Most of us are familiar with the sudden sinking feeling in our stomachs when we crash a drone. While this is certainly not a pleasant feeling, the best thing to do at this moment is to come up with an action plan on how the drone can be retrieved.

It is our responsibility as drone pilots to retrieve a crashed drone with the utmost effort, as it can be a hazard to wildlife and the environment. However, this responsibility is not trumped by the importance of our own safety and welfare. If it’s too dangerous to retrieve your drone, just chalk it up to experience and move on.