During the FAA UAS Symposium in June 2021, the FAA announced the formation of an Aviation Rulemaking Committee (ARC) that will help the agency develop regulations for routine Beyond Visual Line of Sight (BVLOS) operations for drones.

The Challenge of BVLOS Flight

BVLOS drone flight refers to any drone flight that is beyond the visual range of the drone pilot or a nearby visual observer. This may not always pertain to huge distances. Poor visibility due to weather or the presence of large obstructions can drastically reduce the range of flight within visual line of sight (VLOS).

BVLOS drone flight is considered dangerous because of the loss of environmental awareness. When flying BVLOS, pilots can no longer scan the drone’s immediate surroundings to check for potential hazards. They may also be caught unaware that they are violating other drone regulations, such as hovering over crowds or moving vehicles.

Although Part 107.31 or the requirement for VLOS operations can technically be waived, the FAA has rejected close to 99% of the waiver applications for this provision. This is telling of two things – that the FAA takes the hazards of BVLOS operations seriously, and that there are still lots of companies and businesses that believe that they can benefit from BVLOS operations.

The second point is quite obvious considering how many large companies are conducting studies and trials of drone-based delivery systems. BVLOS drone operations now constitute a huge chunk of experimental trials and technological innovations in commercial drone flight. And while the technology is likely to be available soon, the second component of successful BVLOS operations is yet to be finalized – the legislation.

The Aviation Rulemaking Committee (ARC) was formed by the FAA to help in developing the regulations for routine BVLOS operations. The committee consists of 87 organizations representing various stakeholders in the drone industry from academia, drone manufacturers, aviation associations, and local or territorial groups. Also included in the ARC are agencies concerned with privacy and infrastructure security. A list of the complete members of the BVLOS ARC is available on the FAA website.

The background and objectives of the BVLOS ARC are summarized in the committee’s charter document. Among the tasks of the ARC are to identify the social benefits of BVLOS drone operations, identify the safety and environmental considerations of such operations, and make recommendations for the regulation of BVLOS operations. The recommendation report will then have to be submitted 6 months after the effective date of the charter.

Important points from the Final Report

The final report produced by the BVLOS ARC was published on March 2022. The 380-page document is a comprehensive report on the output of the ARC, most notably their recommended policy for routine BVLOS operations. The report is far too long to be summarized in one article, so we will just go over the most important points.

Improving the “see and avoid” system

Under the current 107.37 rule, drone operators are required to initiate an avoidance maneuver to avoid collision with any manned aircraft in the national airspace. This rule takes into account the conspicuity and maneuverability of drones. This is implemented under a “see and avoid” system that has become the lynchpin of the requirement for VLOS operations.

However, the FAA also acknowledges that there might be technological solutions in the future that can be considered improvements to the current “see and avoid” system. The ARC report further discusses the results of a study done by the Embry-Riddle Aeronautical University that shows that the visual detection of UAS has a low detection rate, particularly in low altitudes where the pilot is more concerned with structures and terrain.

The arc proposes the phrase “see and avoid” with “detect and avoid (DAA).” This implies the use of other sensing systems aside from visual scannings, such as ADS-B out or Traffic Awareness Beacon Systems (TABS), especially when operating at very low altitudes.

To mitigate visibility risks, the ARC is recommending conspicuity requirements. This can be in the form of paint schemes or lighting features that should be established with a Means of Compliance (MOC).

Under the current rules, all of the responsibility for collision avoidance lies on the shoulders of drone pilots. This is mainly because general or manned aircraft have the right-of-way in all airspace regardless of altitude. This is no longer reflective of the current technologies and objectives of progressing the commercial drone industry.

Drone regulations designate 400 feet AGL as the altitude limit for drone operations. On the other hand, 500 feet AGL is considered the minimum safe altitude for aircraft operating away from airports. This leaves a 100-foot buffer that should give time for traditional aircraft to scan the area for potential traffic conflict with drones, and for drones equipped with ADS-B to detect the converging aircraft.

The ARC recommends that drones operating in BVLOS be equipped with DAA systems that can detect ADS-B or TABS-equipped aircraft. In such cases where traditional aircraft have ADS-B out, then the aircraft retains the right of way even at low altitudes.

However, traditional aircraft that are not equipped with ADS-B or TABS and operating below 500 feet AGL must yield the right of way to drones. Thus, the duty of drones to detect and avoid at low altitudes applies only to aircraft that do not have ADS-B or TABS.

The ARC goes on to state that nearly half of the existing fleet of general aircraft are already equipped with ADS-B and that they expect adoption to increase with the proposed regulations. Equipping more aircraft with ADS-B is beneficial for the safety of all users of the national airspace.

The ARC recommends that drones have right of way over all other aircraft in Shielded Operations, or in the volume of airspace that includes 100 feet above the vertical extent of an obstacle and within 100 feet of the lateral extent of the same obstacle. The report clarifies that this will not absolve drone pilots from the responsibility of avoiding any aircraft that has the potential to create a collision hazard.

The ARC recommends taking a risk-based and performance-based approach to the question of requiring certifications for drones operating in BVLOS. Kinetic energy is proposed as the basis for qualification requirements rather than takeoff weight. This takes into account both mass and maximum velocity, allowing manufacturers to control applicable standards by setting operational limits, designing frangible aircraft, or equipping drones with parachutes. The ARC proposes that the BVLOS rules only apply to drones with a maximum kinetic energy of 800,000 ft-lbs.

Small UAS refers to drones that are capable of less than 25,000 ft-lbs. of kinetic energy. These do not require a special airworthiness certificate (SAC) but will need a manufacturer DOC to an FAA-accepted MOC for BVLOS operations over environments where ground risk has not been strategically mitigated.

Light UAS pertains to drones that have kinetic energy values of at least 25,000 ft-lbs. up to 800,000 ft-lbs. A SAC will be required for these drones. The ARC proposes that new categories of SAC be created specifically for Light UAS instead of the existing categories such as Experimental or Restricted.

AFR Level 1 pertains to a fully manual system. This involves the usual system of direct human control and monitoring during all phases of flight.

AFR Level 2 pertains to a system with increased automation. Under these operations, human intervention is possible but not required for certain aspects of the operations, possibly due to programmed routes or data collection processes.

AFR Level 3 pertains to extensive automation. At this level, operations can be completed successfully without human intervention. However, there are still systems that accommodate human supervision. This can include monitoring of the operations or the option to pause or halt the operations in response to changing conditions.

AFR Level 4 pertains to ultimate automation. Under this model, operations are handled completely by automated systems without any provision for human intervention. These are assumed to be needed for large-scale BVLOS operations where it is impossible for a human operator to maintain situational awareness to intervene safely.

The ARC recognizes that new systems will be needed for the training and education of drone pilots as the scale of BVLOS increases. With this consideration, the ARC has come up with a few foundational changes to the rules governing UAS operations.

Allow for operations over people

The ARC urges the adoption of a risk-based and performance-based approach to allowing for BVLOS operations over people, recognizing that the drone industry will not benefit from a BVLOS policy that restricts flight over people and moving vehicles.

The ARC recommends implementing an Extended Visual Line of Sight where the drone operator may not see the drone, but a trained crewmember can aid in maintaining situational awareness. In this case, the Trained Visual Observer must be able to communicate critical flight information and assist in maintaining separation from potential hazards.

To maintain safe operations, the ARC recommends revising Part 107.31 to require drone pilots and visual observers to have training on operating aviation radios and monitoring aviation frequencies for any nearby traffic.

Establish a regulatory pathway for the qualification of UAS for BVLOS

Under the current rules, certification of drones for BVLOS operations is only possible through type and production certification under Part 21.17b. This is a lengthy and difficult process that was developed for traditional aircraft carrying passengers and cargo over densely populated areas. Considering the much lower level of risk of BVLSO drone operations, alternative certification processes are proposed.

A special airworthiness certificate can be granted to drones with less than 25,000 ft-lbs. of kinetic energy. This can be done according to an FAA-accepted DOC by the manufacturer to an FAA-accepted MOC based on industry standards. A MOC will include elements including minimum criteria for BVLOS performance capabilities, quality assurance, and methods for monitoring and maintaining continued operation safety.

These are just some of the more important policy recommendations that the ARC has made through the Final Report. As previously stated, the report has almost 400 pages, so this section summarized a very small fraction. The report details other factors such as the need for cybersecurity and a certification process for third-party suppliers and service providers that can provide solutions for BVLOS rule compliance.

What’s next for BVLOS operations?

The BVLOS ARC Final Report was published on March 2022. The FAA then has the option to use the report as an aid for creating policy for unmanned BVLOS operations. It is entirely the discretion of the FAA to decide on the parts of the Final Report that will be considered in crafting legislation.

To avoid disappointment, it is important to keep in mind that this is only an early step in a very long process. As we have seen with the Remote ID rule, creating and implementing a new policy for drone regulations can take at least two years. The FAA is yet to make any comments on the Final Report or announce a plan moving forward.

While there is no concrete timeline for developing BVLOS regulations, there is cause to be optimistic. Trials and limited operations of drone deliveries are still being done by more companies and in more settings, particularly in some rural and suburban communities. These operations set a precedent for and undoubtedly provide use cases for possible large-scale BVLOS operations. Safe and reliable commercial drone delivery is likely one of the major goals of developing BVLOS regulations.

Amidst all the talks about Remote ID, recent developments on BVLOS have received less attention. However, an established policy on BVLOS operations can greatly revitalize the drone industry and change how drone operators approach their flight plans.

The voluminous BVLOS ARC Final Report was published earlier this year, providing early foundations for a possible BVLOS drone regulation in the coming years. We will probably still have to wait for a very long time, but it is important for the drone community to be engaged in this discussion in the same way that community engagement became influential to the Remote ID policy. 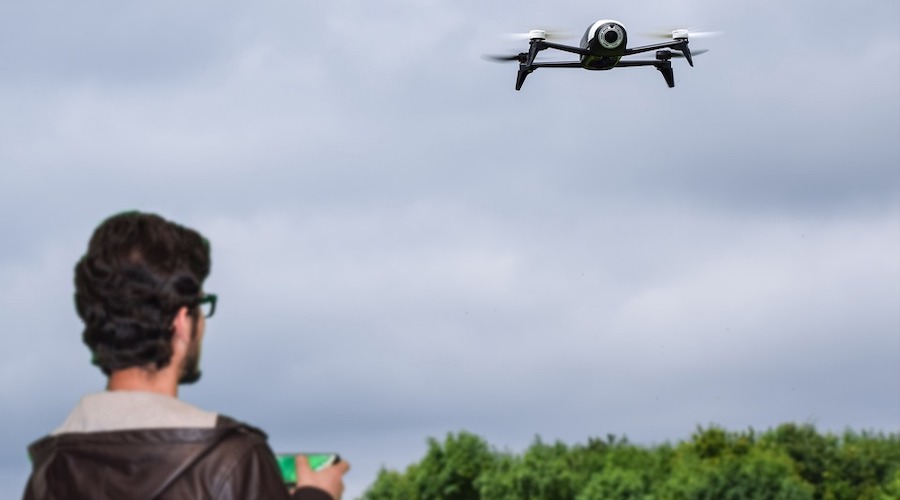